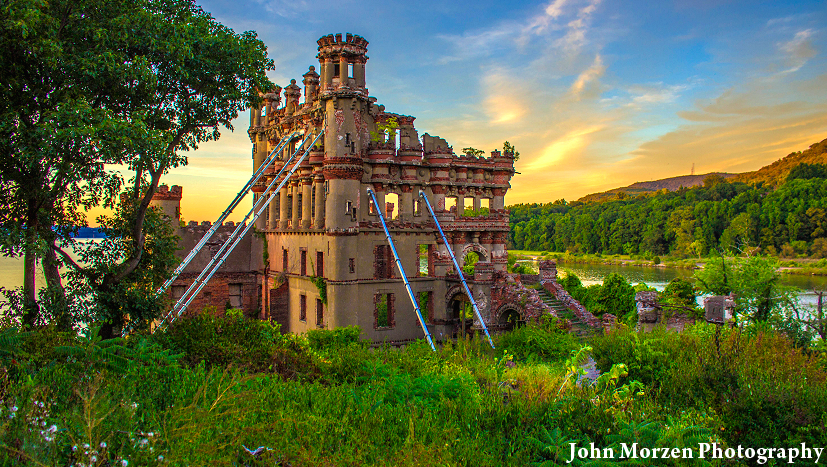 For abandoned building enthusiasts, such as myself, Bannerman Castle represents New York State’s Holy Grail of ruins. It’s not like you can just drive up and poke around. Bannerman Castle is located on Pollepel Island in the Hudson River, just offshore from the southern Dutchess/Putnam County line on the east side of the river. You can only get there by boat, kayak, or canoe, which makes it just tantalizingly out-of-reach enough for someone like me to drool over the prospect of setting foot on the island. Luckily, it’s possible to do just exactly that thanks to seasonal tours offered by Bannerman Castle Trust, Inc., and those tours are set to start up again on Sunday, May 18th.

If you prefer traveling by passenger boat, the Estuary Steward offers 2.5 hour tours that include a scenic boat ride and a guided walk around the property. Tours take places every third Sunday from May through October and cost $35/adults and $30/child 11 years old and younger. The boat departs from Newburgh Landing at 11am and Beacon ferry dock at 12:30pm on Sundays.

Book a kayak tour through Storm King Adventures, which departs from Cornwall-on-Hudson, and includes an island tour. The whole trip takes between 3 and 4 hours. Self-guided tours are also available on Pollepel Island. Find out more about tours and events at bannermancastle.com/visit-the-island.

Unfamiliar with Bannerman Castle outside from watching it whizz by on the Metro-North train? Pollepel Island was purchased by Francis Bannerman VI in 1900 in order to store the arsenal of weapons that his family had amassed over the years. Construction began on the Scottish Gothic-style castle in 1901 and ceased in 1920 when Bannerman died. Through fires and the devastation of time and weather, Bannerman Castle fell into disrepair and is the property of the NYS Office of Parks, Recreation, and Historic Preservation. Efforts to preserve the castle are on-going.