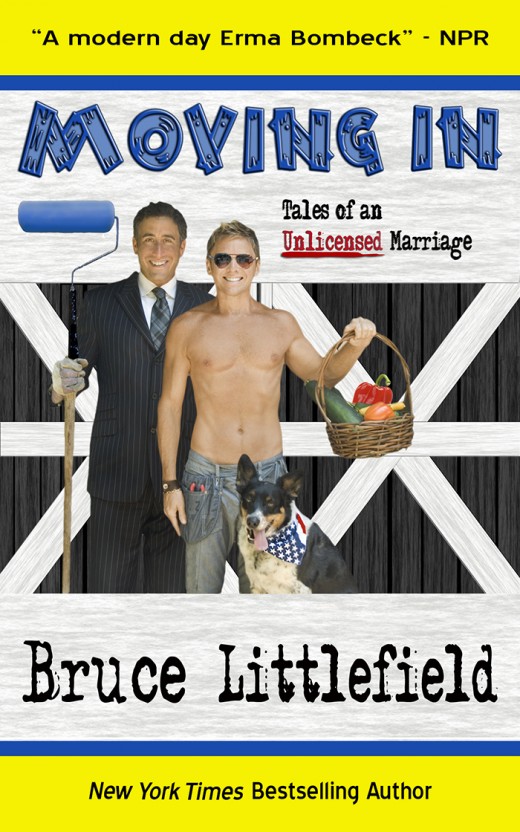 Editor’s Note: Lifestyle authority and New York Times bestselling author Bruce Littlefield shares the antics of his first Thanksgiving in the country, in an excerpt from his book Moving In: Tales of an Unlicensed Marriage.

Owning a house in the country presents all sorts of new encounters and opportunities for expansion of talents and realizations of inadequacies. Our first Thanksgiving was one such episode that has stuck with me like leftover gravy.

As the leaves fell that first year in the country, the thought of Thanksgiving dinner snuck up on me like a Prius on a dark street in Brooklyn. Normally, Thanksgiving is no big deal—we’d walk to the diner a block up from our apartment and enjoy their blessed bounty of canned string beans, cranberry gelatinous, and stuffed turkey. This particular year, however, we owned a house in the country, and Scott’s mother, as well as my brother and his new fiancé, had made a reservation for Thanksgiving at our house, Edgewater Farm. They were all expecting a Martha Littlefield Stewart Thanksgiving feast.

I became panic-stricken at a wine tasting at Stone Ridge Wine & Spirits. It was on my third or fifth tasting when I finally noticed the Thanksgiving display with suggested wine pairings. “Do you know where we can get a catered Thanksgiving dinner?” I asked.

Laurel, one of the proprietors who knows me well, said encouragingly, “Oh, you can make a turkey! It’s so easy.” This is a woman with olive oil for blood. Does she not remember how I singed off half an eyebrow trying to light my oven? Besides, what do I know about turkey? I’m the one who once asked my grandmother whether leaving a turkey in the freezer for a long time meant it would take longer to defrost. And let’s get really real. The thought of sticking my hands up into the inner sanctum of a bird sent shivers down to the depth of my spine.

Scott, my partner in all things, including holiday hell, chimed in by explaining, “We want to have Thanksgiving dinner at home. And a turkey won’t fit in our oven.”
“A turkey’ll fit in your oven!” she said, laughing. She should know—the last time our oven was used, it was Laurel that had made us dinner at our house.”

While the calendar crept toward the fourth Thursday of November, Scott and I talked turkey with everyone we encountered. Fortunately, the Pilgrims were watching over us. Our friend Maggie came by to pick up her pie plate from a recent neighborly gifting. Her face turned sour as she walked into our kitchen. “What’s that smell?” she asked.

“Rotting bee carcasses,” I said, pointing to the taped up ceiling that had become coffin to thousands of yellow jackets after a recent extermination.

“I know. We’re waiting until after Thanksgiving to get our ceiling redone. Scott’s mom is coming…”

“Oh, Thanksgiving!” Scott said, jumping at another opportunity to talk turkey. “Maggie, do you know anybody who’ll make our Thanksgiving dinner?”

“How about Ellen at the golf course?” Maggie suggested. “She’s an amazing cook and they do a delicious dinner. I’ll call her as soon as I get home.”

Thanks to Maggie, within an hour of her departure, our phone rang.

“Hi,” a nice voice on the other end said. “I’m Ellen. Maggie said you need someone to save your Thanksgiving.”

“Yes we do!” I said, sounding desperate and enthusiastic at the same time.

“How big a bird do you want?” she asked.

I shaped my hands into the size of the Butterball we always had growing up. “How big is a Butterball?” I asked. “Is that the size of a bowling ball?”

“A fourteen-pounder should do you,” she decided, saving me from further humiliation.

“That’ll be perfect!” I agreed, as if I knew my birds. “Now, what all comes with that?”

We could hardly wait for Thanksgiving and our homemade feast.

We got up early Thanksgiving morning. I was feeling especially thankful that someone else had her hand up our turkey’s butt. It was sunny and cold—in fact, it was one of the coldest mornings we had yet experienced in the country. “Let’s get in the hot tub,” I suggested. We, like many newbies in the second home culture, had recently installed a hot tub and felt drawn to it like flies to a backyard barbeque.

Like two naked-mole rats, we scampered through the living room and out our new French doors. “Don’t close the…” I yelled one moment too late. The door closed and locked us out. “Oh well,” I said, quickly shriveling, but remaining unusually calm. “We’ll just go around to the front door when we get out.” I tiptoed over to the hot tub, threw back the top and climbed in.

“Aaaaghhhh!” I squealed, my cheerfulness suddenly chilled. “Scott! Did you turn off the hot tub last week instead of the fountain!”

While Scott streaked to the front of the house, I stood like a plucked turkey on the back lawn. “Happy Thanksgiving!” I said, waving across the creek to the cars driving by. Scott was desperately trying to use the hidden key to get in the door. “Did you deadbolt the door last night from the inside?” I hollered.

“Well, you’ll have to crawl through the basement!”

As Scott crawled through our dark, frightening basement, I hid behind a tree and shivered.

When my brother, Brian, and sister-in-law-to-be, Sandra, arrived at our house Thanksgiving Day, we gave them the grand tour. “Did you grow any vegetables this year?” Brian asked as he looked at the frosted remains of our little vegetable garden.

“Sure,” I boasted as we crunched through the patch. “Look, Scott! Our Brussels sprouts are finally ready.” I nipped one and ate it. “Yum!”

“We’ll add these to our homemade Thanksgiving dinner,” Scott said, winking at me.

Both Sandra and Brian turned up their noses. “We hate Brussels sprouts,” Brian said.

“Don’t worry. We’ve made plenty of other stuff.”

It was Scott’s mother who, while sipping her second glass of chardonnay, revealed we had “ordered out” our Thanksgiving dinner. She wasn’t complaining. She was proud of our ingenuity. (She hasn’t made a meal of her own since 1973.) “Why spend all that time in the kitchen, when you can spend it with your family?” she asked.

While driving to pick up our food, all I could do was pray that our Thanksgiving dinner would be good. My brother and Sandra had driven fourteen hours for our fourteen-pound turkey.

“My stomach is growling,” Scott said. “I hope we’re going to have enough.”

Minutes later, we were driving home with a bounty of boxes and a bird that was heavier than a bowling ball.

Since Scott’s mother had given away our home cooking secret, we “cooked” in the open, which is to say, we dumped all the bounty into our own decorative bowls, steamed our handful of Brussels sprouts, and went to the table. Scott carved the fourteen-pounder like a pro, and after a champagne toast, our ordered-in Thanksgiving dinner began.

“Keep your eye off that turkey dressing,” my brother said.

“It makes him blush!”

TV personality and best-selling author Bruce Littlefield has been hailed by the New York Times as a “lifestyle authority” and by NPR as “a modern day Erma Bombeck.” His next book The Sell, The Secrets of Selling Anything to Anyone, with Bravo Million Dollar Listing star Fredrik Eklund will be out in 2015. He divides his time between the Hudson Valley and NYC. Visit him at BruceLittlefield.com and follow him on Twitter at Bruceilla.