Yesterday The Upstater posted an article about Buzzfeed’s 49 Things People From Upstate New York Love. After reading the article I got to thinking…Just WHERE IS Upstate New York? 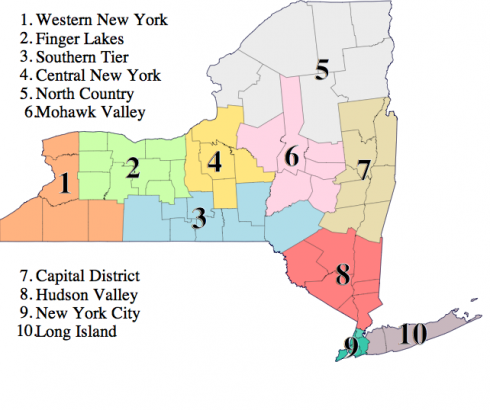 If you look at the URL and name of my blog, (Kary and Mark Move Upstate) I realize I may be asking this question about a year too late. But exactly WHERE does Upstate New York begin and end? If you ask 20 people from around New York, you’re bound to get at least 25 or 30 answers.

Now truth be told, if you’ve read anything about me and Mark,  you know…neither of us are native NYer’s. I’m from South Carolina and he’s from Georgia but grew in up Iowa. I lived in NYC for a total of about 14 years.

When I needed to name our blog I thought about it for awhile because I knew where we were looking to live was NOT considered “Upstate” NY by anyone except perhaps someone from NYC who had never been here. And even though that does describe our first visit, by the time I created the blog I knew better.

So why the name? Simple. It sounded better, it was easier to say, and it took fewer letters to spell.

Technically, if you consider NYC the “center of universe” (bear with me here…..) then everything north of the City is Up state of NYC. But then you bring Westchester into the mix and all kinds of cray-cray talk starts happening by people from all sides.

Tell anyone north and west of Albany that you live in “Upstate” when you live in Beacon and at best they will smile and roll their eyes. People from Western NY seem to get offended if they’re lumped into the mix of “Upstate” New York. And everyone seems to blow a gasket if someone from Westchester says they’re an Upstater.

So I don’t claim to have the answer. Personally I don’t really care. Maybe its because I’m not a native NYer. Or maybe it’s because well…I really don’t care. 🙂 Its a label and quite frankly I’ve always hated labels. *excuse me while I go play a round of kumbaya on my ukulele*

So I’ll end with this thought. After reading the Buzzfeed article and the subsequent arguments and commentary, I actually find all the bickering about who has the right to call themselves an Upstate NYer kind of heartwarming.

IMO, what people are really saying is that it’s actually kind of cool to be from Upstate NY (or the Hudson Valley, Central Upstate, Lower Upstate or where ever) because the bigger meaning is that you are from New York but not New York City.