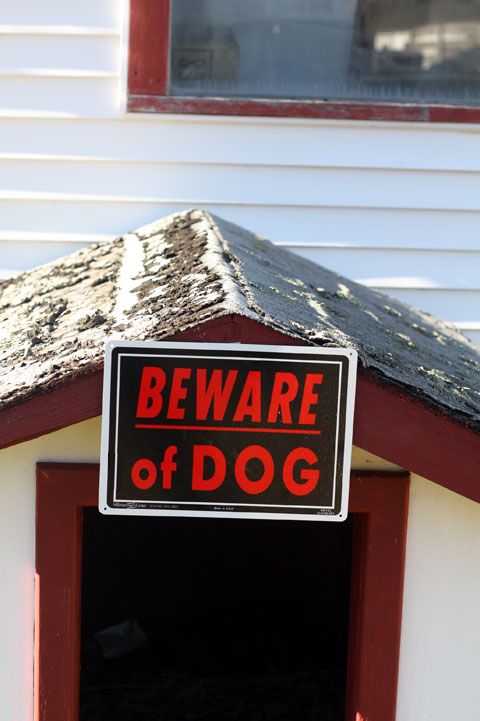 You can always just get a dog…

If  there is one thing that you will probably hear many, many times when you start looking at homes in the country it will be: “It’s so safe here we never even lock our doors!”  I know we did.  The first time we went with our realtor to look at the house we ended up buying, all of the doors were unlocked and we just walked right in.  Until we moved furniture and things up to the house, we locked up when we went away for the week, but if we were just going to town or for a walk or to our neighbors – we pretty much left everything unlocked.

Unfortunately, or you might say realistically, all of that has recently changed.  About four months ago, our friend and neighbor down the road got robbed.  It was a very targeted robbery – thankfully they didn’t ransack the place – they took her TV and an expensive stereo system, but nothing else.  Then a few months later, during Hurricane Sandy, somebody stole a generator from our neighbor down the road.  The power was out in the area, so they broke into the house, cut all of the cables for the panel inside, cut the cables on the outside, and somehow managed to haul it away.   The most recent robbery, and the one that finally got the attention from police, was when some guns were stolen from a gun club down the road.

Though there might be some other connections between several of these robberies (they all seemed pretty targeted and they seemed to require some sort of inside knowledge of what was in the house), the one thing that connects them all is that they were all robberies of homes of weekenders or part-timers.

Because of this, we’ve been trying to come up with ways to make our home a less likely target of a robbery.  These are a few of the things we’ve come up with:

A security system:  There are many different companies that provide this,   but they aren’t cheap.  Most insurance companies will give you a discount on your home insurance if you have a security system with active monitoring.  I priced out a few companies after we first bought.  It was a few thousand dollars to install the system (they have to put sensors on ALL of your doors and windows) and then it was $30 – $40 per month for monitoring.  If a sensor gets tripped, and the alarm doesn’t get turned off with a code, they call the police.  At the time, we didn’t think it was worth it (after all, nobody even locks their doors around here!).  We are reconsidering this.

Lights:  There are some people around here who have outdoor lights that go on when it gets dark, and they stay on all night until it gets light again in the morning.  Thankfully, none of these people are directly around us.   One of the reasons we like where we are in the country is because it’s DARK at night.  Really dark.  We personally don’t want a light on outside all of the time, so our compromise has been motion sensor lights.   We stopped using them for awhile because they do get triggered by nighttime creatures like our resident groundhog and the friendly deer that graze on our lawn.  But we’ve turned them back on and added a few around the back of the house as well.

Cameras:  Now that we finally have internet access, we’ve started looking into having an always on internet camera so we can check in and see what’s going on at the house whenever we want.  There are, of course, hundreds of different cameras and systems you can set up for security.  Trail or game cameras are used by hunters to monitor game trails so they can plan their hunting trips.  In general they are motion activated and some have night vision capability.  If you’re lucky, you might catch some animal activity  (instead of robber activity).  Other systems include cameras with DVR recorders that can save hundreds of hours of recordings which is helpful.   If something actually does happen, you can go back to the recordings and catch the perpetrator in the act.  Again, many, many options available.   One cheap way to set up a security camera is with a webcam.   And if you’re really cheap, you can always fake it with fake signs and security company stickers (and fake TVs and fake cameras!)   Truthfully, I’m not happy about the thought of surrounding ourselves with cameras, lights and other monitoring devices.  Again, we got a place in the country to be away from things like that.

Be aware and watch out for yourself AND your neighbors:  While we’ve heard all about these robberies (we have a good source of local gossip) not everyone in our area had.  After the gun robbery, the police did canvas the area to see if anyone had seen anything suspicious.  The few tips that did come in came from neighbors who saw something unusual.  We also asked our town supervisor to put notices on doors letting everyone know what’s been going on – not only so people can watch out for themselves, but so they can also look out for their neighbors.  The hope is also that if it gets around that people here are more vigilant, (and I don’t mean vigilantes) burglers will be less likely to see properties here as easy targets.

Does anyone have any good ideas about home security besides these, or any tips for potential weekenders?