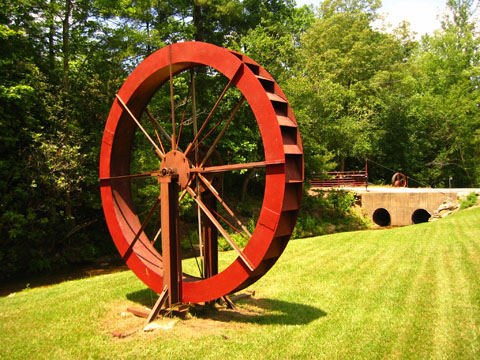 The waterwheel my grandpa built to power his sawmill. Maybe we could stick it in the creek instead of getting a generator?

One thing that you realize once you own a house is how many decisions you have to make.  When you live in an apartment – as a renter or an owner – decisions about things like boilers, roof materials, insulation or plumbing have already been made or they get made for you.  When you own a home, you may find yourself in a situation where existing systems have broken down or need to be replaced or upgraded and you are responsible for deciding when and how to replace or upgrade them.  These types of decisions can have an extra element of indecision-producing angst when you are a weekender and you aren’t in your home four or five out of seven days a week.

Last year after Hurricane Irene, we lost power for a little over a week.  We were at the house for about half of that time.  Being without electricity was bothersome, but it wasn’t life or house threatening.  We had a rain barrel full of water we could use for the toilets, we had put aside fresh water for cooking and washing dishes, and we didn’t have a ton of food in the freezer or fridge that we were worried about spoiling.  Anything that we did want to keep, we ended up taking with us back to Brooklyn and keeping it there.  But the main reason that it wasn’t a problem was that it was warm outside and we didn’t need to worry about heating the house and keeping the pipes from freezing.  Even so, we decided to get a generator for the next time the power went out for an extended period of time.

Yet here we are, more than a year and another hurricane later and we STILL don’t have a generator.  There are several reasons we haven’t done it yet:

Budget:  Getting an automatic generator – one that turns on automatically when the power goes out – isn’t exactly cheap.  We’ve gotten five different quotes which range in price from $10,000 to $4,000.  When I see these sorts of numbers I automatically start trying to calculate the cost benefit ratio or return on investment and if it’s really worth it.  There’s also the extended costs of running a generator: when they are running, they use a surprising amount of propane.

What sort of set up will work best?  Part of the variance in the quotes we got is because everyone has a different idea of what the right or ideal way would be for us to install a generator.   The simple idea of installing a separate panel so the generator powers only the items on that panel is the standard way of installing generators.  The last guy who gave us a quote suggested that rather than a separate panel, we just install a transfer switch.  This transfers the power from the generator to the entire house – you just need to be careful about how much electricity you are using at once.  It’s more expensive to install, but gives you more flexibility.

We also have an issue with the fact that our barn is on a separate meter from the house.  Central Hudson charges us $30 a month just in delivery charges alone (our bill for actual electricity that we use in the barn is usually 20 – 50 cents per month).  We’ve been wanting to find a way to put the house and the barn on one meter, thus saving us some money overall.  We got a quote to do this AND install a generator AND upgrade the power to 200 amps.  Probably the best idea, but definitely not the cheapest.

Do we really need a generator?  After Hurricane Sandy, everyone wants a generator.  This has been the biggest question for us overall, and part of the answer lies in the fact that we are only at the house on weekends rather than full time.  The primary reason we need power is to keep the heat on in the winter so our pipes don’t freeze.  In one way, if we were full-timers, getting a generator would be a no-brainer.  If the power goes out for an extended period of time, it would be a real drag living without running water, lights and in the winter, heat.  But at the same time, if we were full-timers, we’d be there to keep an eye on things could keep the fire going to keep the pipes from freezing, so we wouldn’t need it.

As weekenders, having a generator that comes on automatically if the power goes out (so you don’t need to be there to hook it up, start it up and keep feeding it gas) would be a real worry solver.   But at the same time, what is the likelihood of the power going out for enough days and for the temperature being cold enough over a long period that we couldn’t somehow get to the house and start the fire?   We do the basics to hopefully keep things from freezing if we aren’t around – we turn off the main water supply and we have anti-freeze in our hot water heating system so those pipes are unlikely to freeze and break.  But still, what if?  Burst pipes can cause thousands of dollars in damage.

If climate change is a real thing, who knows what kind of freak storms we’re going to be getting up there in the future, and we should probably be prepared for the worst.  Two one hundred year floods and one 500 year flood in the past ten years makes them seem almost normal.  But since we have so many other tactile things that we’d like to spend money on – like putting a woodstove in the kitchen, fixing the bathrooms, and fixing the porch around the house –  shelling out the cash for something that we MIGHT use in the future is hard to do.

Ideally, we’d have some way to generate our own power if the supply went out (like my grandpa’s waterwheel).   Robert Brown Butler had some good suggestions in his post yesterday about generating your own electricity which also points out it’s all about viability and of course, cost.

Has anyone recently installed a generator because of the storms, or do you have a story of when your generator absolutely saved you or your house?  We’d love some help finally making a decision.