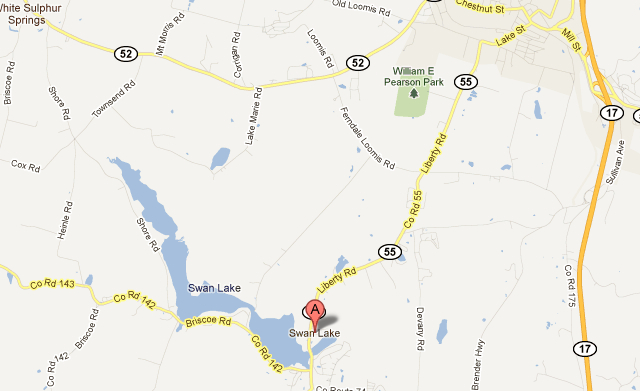 Of course, there’s no town to speak of in Swan Lake, N.Y. According to one loyal reader who owns a co-op home in a bungalow colony there, “There is a place called Mike’s Deli where locals hang out, that is it!”  There’s a tremendously unpretentious country club, and a wonderfully misnamed development called “Presidential Estates,” a four-season compound of humble homes — neither presidential nor estate-ish — that has a pool and tennis courts, as well as lake access. There’s also the Swan Lake Resort Hotel, which seems not to have a website, but here’s a video remembrance of it from its Borscht Belt days, when it was called the Stevensville Lake Resort (Stevenville was once the name of Swan Lake — the latter name is better, yes?).

So what’s to recommend the hamlet of Swan Lake, 111 miles from the 11215 zip code and 1o minutes southwest of downtown Liberty, NY (which, in all its potential and complications, deserves its own post)?

The lake, of course. It’s private, with few motor boats, except for those owned by folks who have deeded rights to them (if you want that, look for a home that comes with motor boat rights, but I think motor boats ruin a lake, myself). Although we’ve heard from residents that it’s not great for swimming — really just a body of water to look at, which is perhaps why those places with pools are in such high demand.

And then there are the prices: they’re good. The most expensive home for sale in Swan Lake, NY is $599,000, and there are dozens under $100,000 (which our Five Figure Friday correspondent will be covering in the future). Most of the homes are newish, mid-20th century, little low-ceilinged cabins that can be renovated into stylish, comfy mod getaways if you have the right design sense. (By the way, we recommend our newest correspondent, Upstate Jane, who owns Dichotomy Interiors and has done amazing things transforming small, dark humble little places into hip pads).