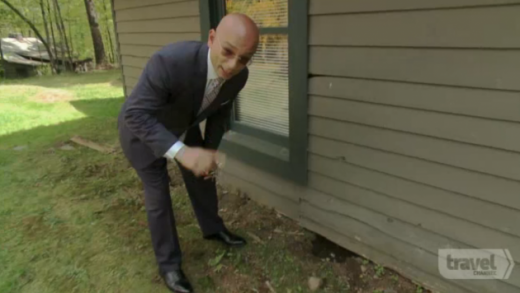 Recently, the Woodstock Lodge in Woodstock, Ulster County was featured on Travel Channel’s “Hotel Impossible,” which sends the host, Anthony Melchiorri, and a camera crew to a failing hotel to tell them what they’re doing wrong and a little renovating along the way, usually a common area plus one room in order to give the hotel owners a template with which to work. The show almost always includes a happy ending in which hotel owners shed a tear at the renovations and vow to make things better (Palenville’s Catskill Mountain Lodge was featured on the show back in the spring). When Melchiorri visited the Woodstock Lodge, owned by Carlo and Annie Pumbo, it wasn’t all flowers and happy tears.

Turns out the cabins at the lodge were unfit accommodations with black mold, poor plumbing, and general disrepair on the inside and dangerous open septic systems and wet electrical wiring on the outside. In fact, the experts brought in to evaluate the Lodge’s conditions suggested the owners demolish the cabins.

After a number of heated disagreements between the host and the Pumbos, the host and crew were ejected from the Lodge but not before fixing up the Lodge’s bar and restaurant. Here’s a short clip of the episode entitled “Rotting Woodstock.” Our friends at the Woodstock Times give the Cliffnotes version of the episode, along with the revelation that the Pumbos are filing a lawsuit against the Travel Channel for their portrayal of the Lodge. Naturally, questions regarding where the local and county regulatory oversight was for this hotel, and according to the Woodstock Times, when they inquired to the Ulster County Department of Health if they were overseeing the inspections of the hotel for the state, they were “repeatedly told that no one could answer press questions without the okay of either a commissioner or the county executive.”

So, we can’t help but wonder what leg the Pumbos have to stand on regarding their suit. When it comes to reality TV, participants sign a bushel of release forms and agreements basically allowing the show to have carte blanche over what happens to the establishment. How were the Pumbos not aware of this? Further, with these revelations, how is the hotel still open? Or, more appropriately, when will it get closed down for good?