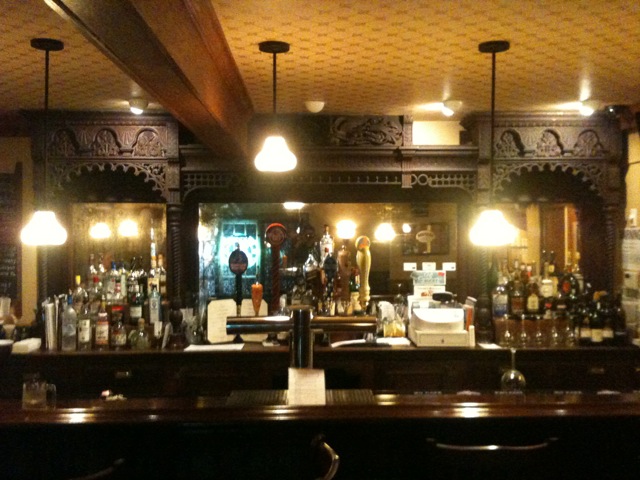 I’m a sucker for DIY liquor infusions, which is why I instanly fell in love with Currans in Tannersville.  Brock , the affable bartender, infuses many of the bar’s gins and vodkas at home, and at his urging, I tried the ginger-spiked gin martini. It had a substantial fresh ginger kick but went down smooth and icy. There’s something about the simplicity of liquor + ingredient, sans mixer, that makes a house-infused liquor seem almost medicinal. I’m convinced those martinis were good for me.

Brock was eager to tell us about the history of Currans and the gorgeous hand-carved showstopper of a bar. “The longest continuously licensed Ale House in the Catskill Mountains, ” Currans used to be a local watering hole run by a church-going grandma who would periodically kick out regulars for cussing on a Sunday. After a three-year renovation, it was reopened last February by Sean Byrne, the grandson of the original owner. The bar itself was shipped up from New York City via railroad during the Civil War and miraculously survived the Prohibition. The restaurant and tavern are laid-back country elegant, and the menu mixes pub food and New American, with a heavy emphasis on local ingredients. I loved the bar scene, too: an old guy playing a guitar, two neo-hippies in knit caps who would have annoyed me in the city, a nice mixture of generations that one rarely sees at bars in Brooklyn. It reminded me of the best bar ever, the long-gone Stony Creek in Tivoli in the late ’90’s.

If you have a favorite local bar, let us know—or share with us any memories of our dear, departed Stony Creek.