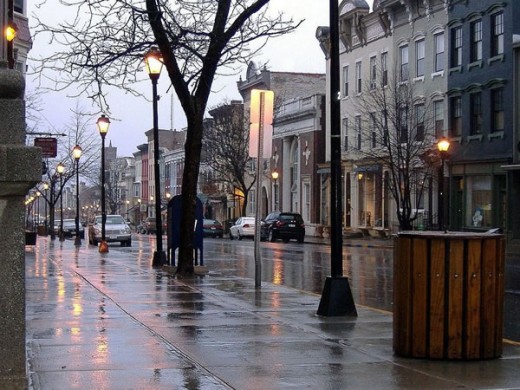 It’s about time the city of Hudson got the attention it deserves.

Since it’s Monday, we’ll give you a minute to let the sarcasm of the above comment sink in. There’s no shortage of love or press for Hudson, so when Jetsetter.com placed it on the number 3 spot on its 10 Coolest Small Towns list, we can’t say we were surprised. Some of us have been loving Hudson’s artsy, sophisticated Warren Street vibe for years before it blew up, back when, as our friend and contributor Abbe Aronson described it, “Hudson was cheap and a little bit scuzzy and it was delightful.” We’ve also been watching the property prices steadily rise along with the Columbia County city-on-the Hudson’s popularity. Is it still possible to get an affordable (a relative term, but let’s go with <$300,000) house in Hudson? The short answer is yes. It just depends on what you consider affordable, and what you’re looking for in a house. The long answer is…it’s complicated. If you don’t mind spending $200,000 on a fixer-upper near (not on, mind you) chi-chi Warren Street on very little land, there are more possibilities for you. Or, if you can deal with a split level Ranch out in the country and not right on the city, perhaps you’ll find more options. However, the days of 3-bedroom Victorian rowhouses with high ceilings, wood floors, and a fireplace in every room going for a song are mostly over. Time to recalibrate.

Here’s the good news: The rest of Columbia County is beautiful. I’ve lost count how many times I’ve hopped in my car and headed over the Rip Van Winkle Bridge, east-of-Hudson, toward Columbia with no particular destination in mind. Well, except to stare at houses, but I do that everywhere. And, there are affordable houses out there where it’s a little more green, a little quieter, maybe not in the epicenter of Hudson Valley hipsterness, but still close enough to drop in on the reg. So this week, we’ll be exploring affordable options in Hudson and some nearby areas. Stay tuned…