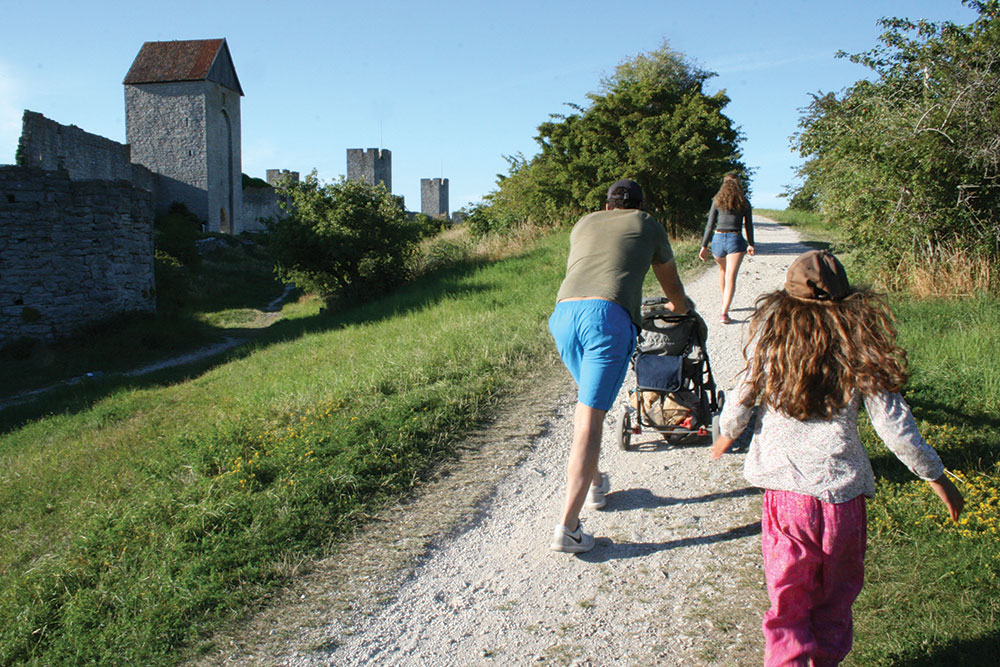 Sara Jansson has 15 weeks of paid vacation every year, so she never works during her children’s school breaks. Instead, she preps and cleans a lot of meals for her brood of five, and hangs out at the beach in their hometown of Stockholm. Jansson says Swedish parents don’t tend to stress out about summer activities for their kids because they can always go to fritids, an afterschool program that costs about $80/month. “Here, we have a much bigger social net that will catch you if you’re having a hard time,” she explains. “Vacation and time to rest is for everyone, and it is very important to our health.” Jansson and her partner, musician Eric Fallope, take turns making jaunts with one or two kids to the mountains in north Sweden, or to Copenhagen, Berlin, or Paris. In Sweden, employers in all industries have to provide at least five weeks paid leave. Jansson knows only one person who works more than 40 hours a week—a heart surgeon. “Swedes love vacation and summer,” Jansson says. “That’s what they live for the rest of the year.” After midsummer on June 20, most people start their holiday, and go back to work in August. For a couple weeks every summer, the Jansson-Fallopes rent a house in Gotland, Sweden’s biggest island, where they lounge beside the Baltic Sea together.

For many cultures, taking time off to rest and recharge is the counterpart to productivity. “In Finland, and in many other countries, children receive frequent recesses throughout the school day,” writes Timothy Walker on his blog, Taught by Finland. Walker is an American who teaches fifth grade in Helsinki and a contributing writer for The Atlantic, who just published the book Teach Like Finland: 33 Simple Strategies for Joyful Classrooms. “Students typically enjoy a 15-minute break for every 45 minutes of classroom instruction. The younger pupils head outside for free play while older children get to decide where they spend their free time.” Rather than being seen as a waste of time, breaks are considered an integral ingredient of productivity and focus. Outside, the kids process, through free play and chatting, the information and concepts they’ve been shown, and in the teachers’ lounge, there’s collaboration and discussion around teaching methodologies and shared administrative tasks. The need for downtime in order to integrate experience into a person’s internal landscape is considered vital.

Yet in America, the message is decidedly different. With a focus on the summer slide—the idea that kids lose ground in reading and math skills without continuous formal practice—our productivity seems to center on constancy. Primarily a concern for low-income kids who often lack resources and adult supervision, the summer slide is frequently referenced to encourage middle class families to get a leg up on college resumes. Summer programs are offered for academic enrichment, as much as to solve the childcare needs of working parents, many of whom are lucky to get two weeks paid vacation.

However, when one investigates the summer slide messaging, it seems most touted by tutoring franchises. They maintain that the current 180-day school calendar is an outdated model from pre-Industrial times when rural children were needed for family farms, and urban children needed to escape the heat of the city. “In terms of the brain, learning runs 24/7, all year round,” the Oxford Learning website states. The result is a pressure to engage in summer enrichment programming.

In fact, it’s been successful. The Bureau of Labor Statistics found that teens who work a summer job are not only on the decline but have dropped drastically since 2005. In February 2017, they wrote, “The [teen labor] participation rate declined during [the] recession and immediately after, falling to 34.1 percent in 2011. It has changed little since 2011.” Instead, kids opt for more school. “More teens attend school during the summer now than in previous years. The proportion of teenagers enrolled in July 2016 was more than 4 times higher than it was in July 1985.”

“Unstructured down time is one of the greatest gifts (and challenges) we can offer our kids over the summer,” writes Michele Kambolis, a child and family therapist and parent educator in Canada. “It’s when they discover new passions, talents, and learn to structure and regulate themselves,” Kambolis told the blog Spit Up is the New Black. “Their imagination flourishes and relaxation comes naturally as they find their authentic voice, unimposed by adult expectations and agendas. It’s a time when children can be in control, relax, and maybe even uncover their dreams.”

In two books on the happiness of the Dutch, expats Michele Hutchison and Rina Mae Acosta write about raising their kids in the Netherlands. They paint an idealistic picture of children free ranging on bicycles, and looking forward to papadag, the day they spend each week with their dads—a facet of Dutch egalitarian society, since Dutch parents generally equally work fewer than 40 hours per week and Dutch children enjoy unstructured learning until the age of six. Both books are titled, in part, The Happiest Kids in the World, a reference to UNICEF’s Child Well Being in Rich Countries survey of 2013, where Dutch children were found to be top of the list.

When it comes to education, Dutch kids enjoy little academic pressure. “In the Netherlands, it isn’t all about getting straight As and getting into the right university,” they write. “Education has a different purpose. It is traditionally seen as the route to a child’s well-being and their development as an individual.” So it might be surprising to learn that Dutch children are given only five to six weeks of summer break as opposed to our ten to eleven. But in a recent post on their blog, Finding Dutchland, American-bred Acosta explains why that works. “There’s this unspoken, often self-imposed pressure to give our children an amazing, magical summer experience,” she writes. “But for the Dutch, summer is something that they all seem to look forward to without that emotional or financial baggage.” They go camping, play tourist at home, and embrace boredom and gezelligheid, which loosely translates to a feeling of enjoying life’s simple pleasures in relationship with others. The Dutch fully recharge during their summer break, and return to their work feeling engaged.

With a focus on connection and family time, the Dutch seem to feel that a child’s happiness begins at home. “It shouldn’t be surprising that the happiest kids in the world also have parents who are also among the happiest people in the world,” Acosta writes in another blog post. She cites an emphasis for women on pursuits beyond appearance, financial supports for families, and little homework for kids as the reasons why the Dutch are so blissed out. It’s because of all this that Acosta hopes “going Dutch” will be the next big parenting trend.

Doree Lipson is driving and on speaker phone as I ask her about the mindfulness techniques at the heart of Wellness Embodied in New Paltz, a center for psychotherapy and healing, which she founded and directs. “I have to name how ironic this is,” she laughs, pulling into a parking spot.

Lipson acknowledges that so much of the work we do as human beings centers around scheduling. She admits she’s so much better about it with her kids, ages 9 and 5. “I might schedule myself to the edge of the universe but, with my kids, I’m very protective of their down time,” she says. “If children don’t learn the executive functioning that allows them to be comfortable in themselves, the reading and math skills are irrelevant. We need to pay attention to the entire being, not just the part that does math problems. Having time to figure out what direction you want to go in, or what book you want to read, what tree to lay under and look up at the sky, it’s a different kind of learning. It may not be as mainstream acceptable but it’s essential.”

Wellness Embodied hosts one-on-one sessions with psychotherapists and healing practitioners, who use mindfulness techniques and alternative modalities. They also offer classes and workshops for teens and adults, which focus reflection inward. “That can be a beautiful companion for therapeutic work, or enough on its own, depending on who the person is,” Lipson explains. This summer, they will offer lectures and workshops for healing professionals to deepen their practice.

“Our culture really runs in opposition to the very real human needs of rest, processing, and understanding the pursuits we engage in on a regular basis. So there are increased levels of anxiety, depression, and overwhelm in this country,” Lipson says. “Often what I work on with people in the therapy office is slowing down.”

Sabine Sonnentag, a researcher in the Department of Psychology at the University of Konstanz, Germany, studied psychological detachment, or the individual’s experience of disengaging from work: “to make a pause in thinking about work-related issues, thus to ‘switch off.'” One study looked at a sample of 148 school teachers, and the other 159 employees from various industries, and found that both engagement while at work and disengagement when away from work provide more productivity and satisfaction. The key is a healthy balance between the two and intentional focus in each realm.

Lipson finds the constant stream of input from our many technological devices creates overwhelm and disconnect. “The importance of mindfulness and spaciousness is that it can help with differentiation. ‘I don’t need to plug in now; I want to stretch or go for a walk instead.’ When any of us are in a state of overwhelm, we’re not going to make good choices.” Adults model the engagement, happiness, and balance they want for their kids. Lipson says it can be really helpful to create symbolic gestures: a mantra on the ride home from the office; leaving work items in the car; changing out of work clothes when arriving at home. “How do you leave work at work?” she asks. The answer to that might even inform American attitudes around a child’s ability to learn while at rest.