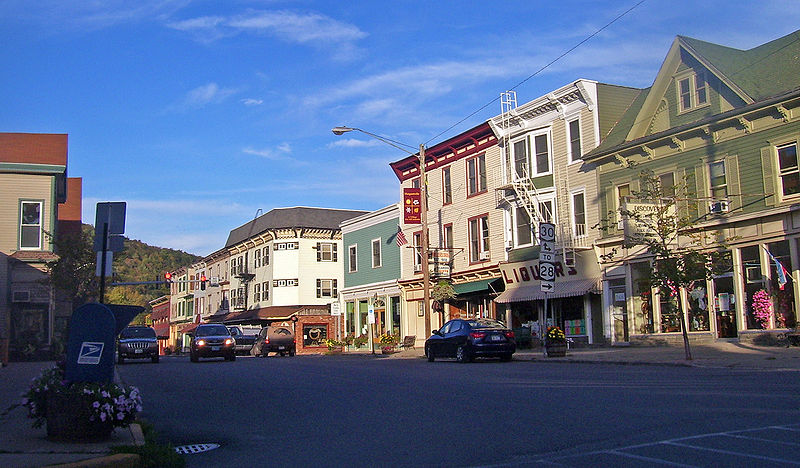 Since we haven’t been to Margaretville ourselves, we invited a loyal Upstater reader, herself an accomplished writer, to weigh in. Jennifer moved to Maggieville, as she calls it, from London in 2006, after searching for a place that was both rural and walkable, full of amenities but unpretentious, which is a pretty hard set of criteria to realize. She calls Margaretville, population 643, a “cross between the cute and practical, quaint and quirky.” She can get pizza, fresh veggies and superb Internet customer service, but lacks a certain amount of privacy (it can be friendly to a fault), direct access to good restaurants and movies–it’s 40 minutes to the nearest theater in Woodstock. It’s not train-able, the only public transport being a Trailways bus which takes three hours from the City. For her, the deficits are entirely worth it, as you can read in her post below. We’ll be checking out real estate here this week — word on the street is that nice properties are cheaper here, deeper into the western Catskills, than they are closer to the river.

Take David Lynch, add some good ol’ boys (with Buddhist prayer flags even), a few gay couples of a certain age and a number of old people and you get Margaretville. (Or Maggieville as my husband and I like to call it). It’s got a population of 600 and some depending on the day, and moving here from Brixton was an odyssey too long for a blog post. Let’s say our escape from a place best known for being in a Clash song entailed a list of things we wanted: blackberry picking, hiking, home-canning and some amenities. We’d never owned a car, and in the midst of looking realized going too rural might risk a scene from The Shining so settled in a village Victorian and for being able to walk to groceries and liquor store.

And, Margaretville does have amenities you’ll want if you’re here fulltime. Bovina has a quaint general store, Andes edgy antiques and Phoenicia a great breakfast spot. But, in Maggieville you get Freshtown. Which, thanks to a benevolent owner and a several million-dollar renovation, sells local food and has an olive bar (don’t underestimate the draw of fresh olives) as well as twee chainsaw bears. (Tourists love them). There’s a well-stocked liquor store, CVS and a pharmacy whose owner you can call at home in an emergency. The village is a cross between the cute and practical, quaint and quirky. At Home Goods you can find a pizza stone in a pinch, that Le Cruset piece you’ve always wanted and ace cooking advice. We have an excellent second-hand bookstore, and a good (though a total scene) farmers market outside the village. There is also MTC, Margaretville Telephone Company. Problem with the modem? They’ll come that day, usually in about fifteen minutes. If you call, you never need an account number. They know your name. Once we had to RSVP to a neighbors’ Christmas party and couldn’t get through because of a problem on the line. I called MTC, and they RSVPed for me as well as fixing the issue.

All this nice-neighborliness comes at a cost: privacy. Everyone knows your business. We raise salad greens in our sunroom with grow lights in winter, and everyone suspects pot. Which is definitely grown around here but not by us. (It was arugula.) The restaurants in the village aren’t great. The names give a hint of what they’re like: the Bun & Cone, the Cheese Barrel, and the Flour Patch (which does do good bagels). Driving three minutes to Arkville though gets you wood-oven pizza at Oakley’s (just tell them to burn it, so the crust gets done enough) and a good cheap breakfast and lunch at Arkville Bread and Breakfast or the Market Basket (owned by a former Disney Imagineer turned farmer). Further afield in Big Indian is the excellent Peekamoose, run by a husband and wife – he hails from the Gramercy Tavern and she from Sir Terence Conran. (It’s our salvation – we still miss St John in London)

Still, Margaretville may not be for all. It’s in the eastern part of Delaware County (itself the size of Rhode Island) and closest to New York City, but there are few hipsters “in town,” as many call the village. (They prefer to live further afield in places with fields, understandable given they’re often second-home owners.) When we first came, most people who’d moved from NYC were in their 50s and 60s, and the village itself is what’s called a NORC, that is, a Naturally-Occurring Retirement Community. In summer we can hear our neighbor’s TV set and struggle not to suggest he gets a hearing aid. We’ve also gotten used to another unnatural sound, the growl of diesel engines on pickups. They start early in the morning.

Still there’s a diversity we didn’t have in London where it was easy to hang out with people who did roughly what we did. There’s little chance of that here. Instead of those worrying over getting a published/ illustrating X or Y or writing this or that, there are farmers whose biggest concerns are making the mortgage and the price of milk. Politically the area is definitely more red than blue. Often more red than green, in fact. (The transfer station only recycles a few select things). Recently we got some neighbors our age – fracking refugees who’d moved from a small town near Binghamton to avoid hydraulic fracking. We’re in the New York City Watershed, so safe from drilling, though the watershed is a bit of a mixed blessing.

It brings plenty of open space and undeveloped land (the city is mandated to keep buying it up to avoid an even more expensive option:  a filtration system). And many pieces of that land are open to hiking and fishing. (All NYC residents get your tax dollars’ worth and use it). But people here don’t like the DEP or the city. They sport “DEP Off My Back” bumper stickers. The animosity runs deep and decades long. The city still wants a say in every stream and septic here, and to many NYC is virtually a colonial power. It even has its own police force. The relationships are fraught and fascinating – and part of what is fueling the novel I’m working on now.

Living here fulltime isn’t for everyone. Winter is long – five months – and the nearest movie theater is in Woodstock, a 40-minute drive away. There are some well-known artists but most of the local arts institutions are, well, local. On the up side, in our house we don’t know how to lock our windows or garage – the key doesn’t seem to work to it – and Margaretville itself seems to be stuck in a kind of Andy Griffith 1950s. We have a part-time cop, who works only in summers, and if you’re dropping something off at a neighbors’, they say “Just come in the kitchen door and leave it on the counter.”