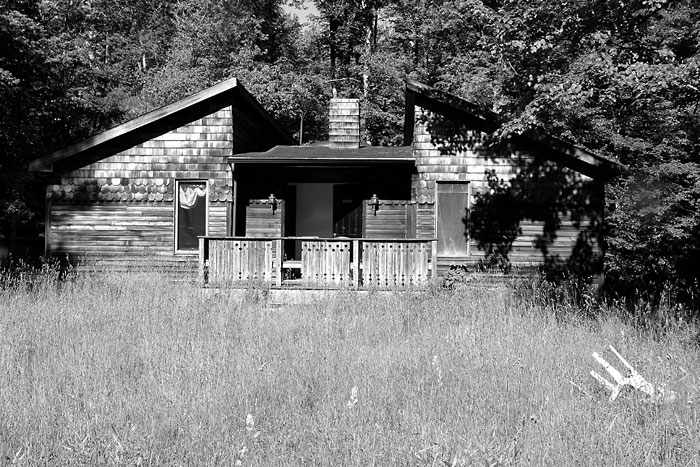 An abandoned bungalow, a mile from the photographer's home

Since one of us bought a house up here, and the other one devotes far too much time to investigating the purchase of an upstate house, it’s clear that we believe there are deals to be had in the current Upstate real estate market.

Another ex-New Yorker, Raymon Elozua, believes the same, and moved up to Mountaindale, N.Y. to live among the ghosts of buildings that he found around him. (Mountaindale, by the way, is part of that same general area covered in yesterday’s Bungalow Envy post–the Sullivan County stretch that still has plenty of functional, happily inhabited places, as well). His project is Vanishing Catskills, a pictorial map of abandoned Borscht Belt buildings within 10 miles of his home. Sadly, there are a lot of them.

He sees them as ruins, as testaments to Sullivan County’s heyday and decline, but also as interesting on a sculptural and architectural level. We see them as full of potential. We truly believe that in these tough times, folks are searching for economical getaways, and that reviving the bungalow colony is a great way to do it. We’re going to come back as developers in our next lives.

Another interesting thing about Vanishing Catskills: you can buy Elozua’s photo books directly from Apple. Definitely worth having as a coffee table book if you’re joining the ranks of Upstaters.