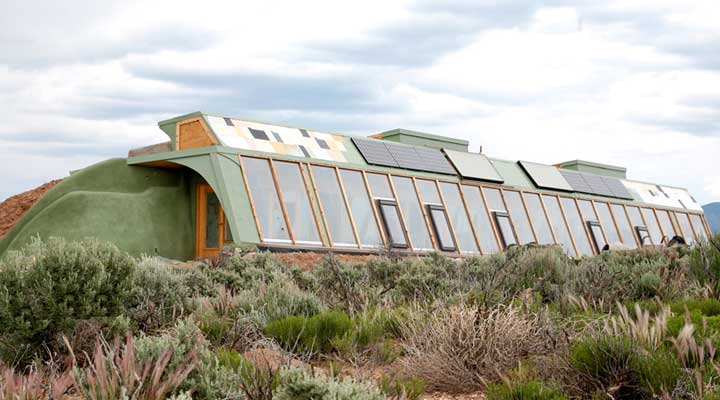 Do y’all know about Earthships? Because if you don’t, well, you are missing out on one of the coolest kinds of housing on the planet. If I don’t end up with a bungalow in a colony, I really hope I can someday build an Earthship. They’re built of recycled materials–tires, bottles, cans–stuffed seven-feet thick into mud, a wall of angled glass that turn your living room into a garden, year round (I’ve seen them growing bananas inside in Taos), and thrice-gray water: from your sink to your indoor garden, from your garden to your toilet. Then, from your toilet, filtered into blackwater and cleaned and used for landscaping (yes, occasionally, a faint scent of sewage, but faint). They stay at about 70 degrees year round with no heating or cooling, and you pretty much have no utility bills (seeing as you catch rainwater on the roof).

They were designed by former architect Michael Reynolds (his license was revoked for disobeying subdivision laws — a great documentary about it called Garbage Warrior), and though he’s created a whole community of them in the New Mexican desert, they can be altered to suit any climate. And, finally, one is being created to suit the sometimes inhospitable climate of the Finger Lakes.

You can join the team building one in Freeville, NY next August. Warning: it’s extremely hard work, packing dirt into tires and such. But once you see one of these being built, and once you stay in one (so clean, so soft-feeling, so peaceful), you will wonder why Reynolds’ ideas haven’t made their way into common practice in modern architecture.