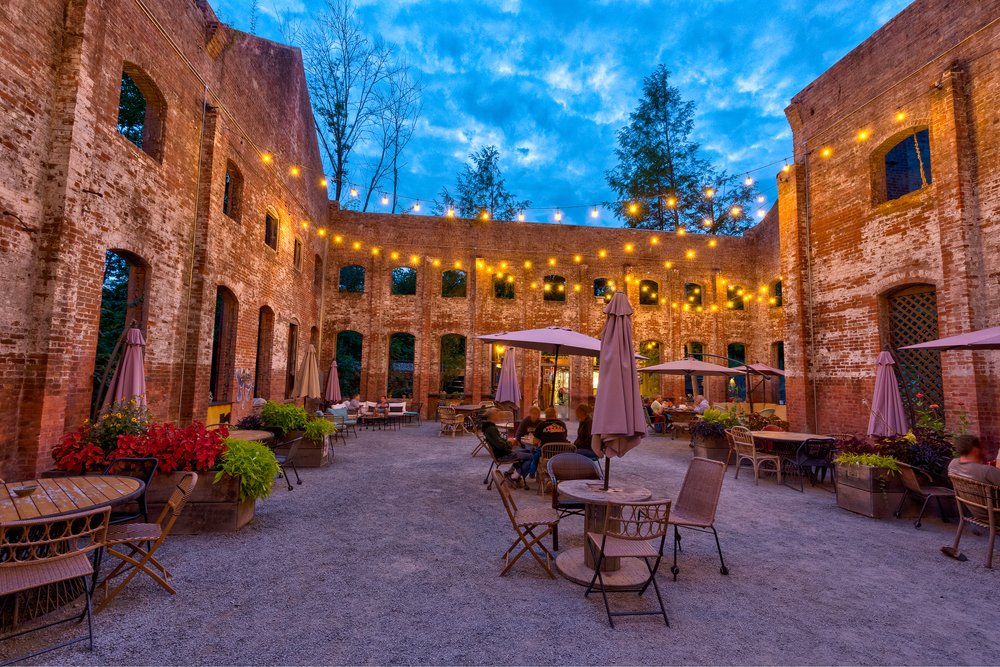 We’re straying from our Five-Figure Friday routine to explore this hot property on Route 97 in west-central Sullivan County.

The c.1879 Cochecton Pump House was a roofless ruin when Dave Lieber and his partner Jin Zhang purchased the 3-acre-plus property during the thick of the COVID pandemic in the summer of 2020. By mid-2021, the Cochecton Pump House—though still roofless—had become a cool venue for live music and Germanic food. Now, the business—including the brick shell and the 1,900-square-foot, three-bedroom house onsite—is for sale. 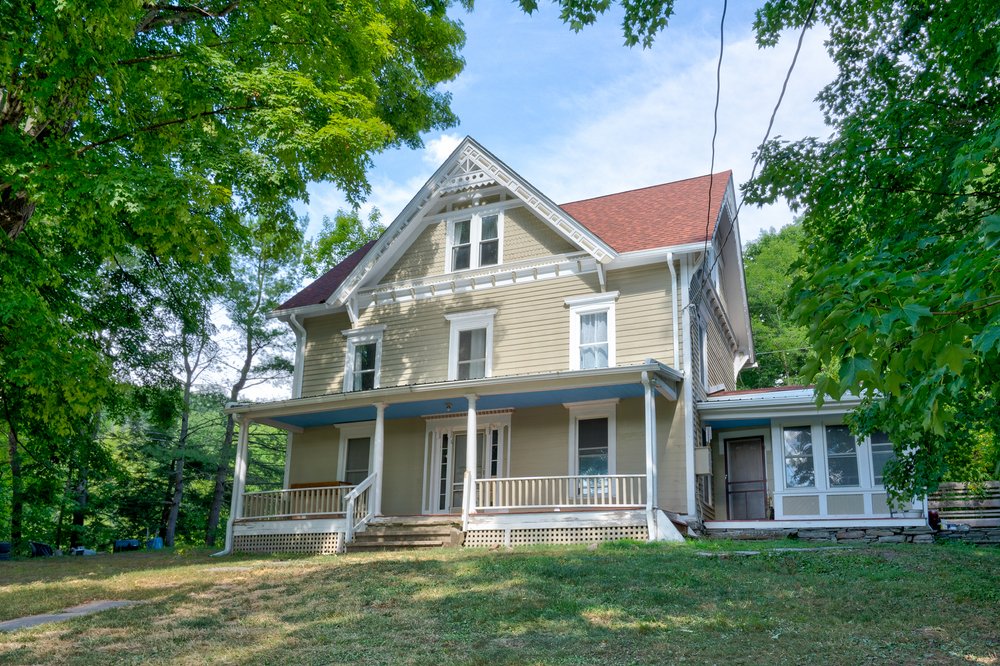 The farmhouse screams tradition from the outside. There are no photos of the interior in the listing, but a description says it was built in 1910 and has one full bath, plus a full attic for future renovation. 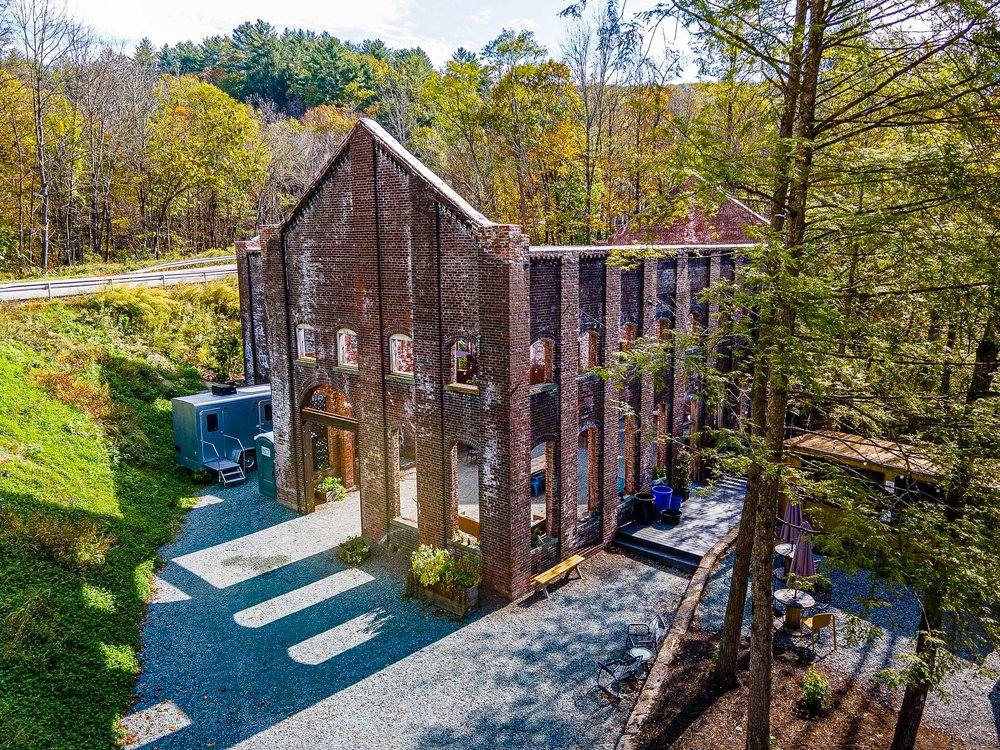 The pump house itself was built by Standard Oil as part of the nation’s first long-distance oil pipeline. It connected Olean, NY, to Bayonne, NJ. Eleven pumping stations (including this building) were spaced about 28 miles apart and carried more than 50,000 barrels of crude oil per day.

But only 46 years later (in 1925!), the company abandoned the Cochecton Pump Station and the rest of the pipeline. The stately brick building soon was absorbed into the landscape as Mother Nature recaptured her territory, winding trees through the floor and vines throughout the windows for nearly a century before Lieber and Zhang flexed their imagination. 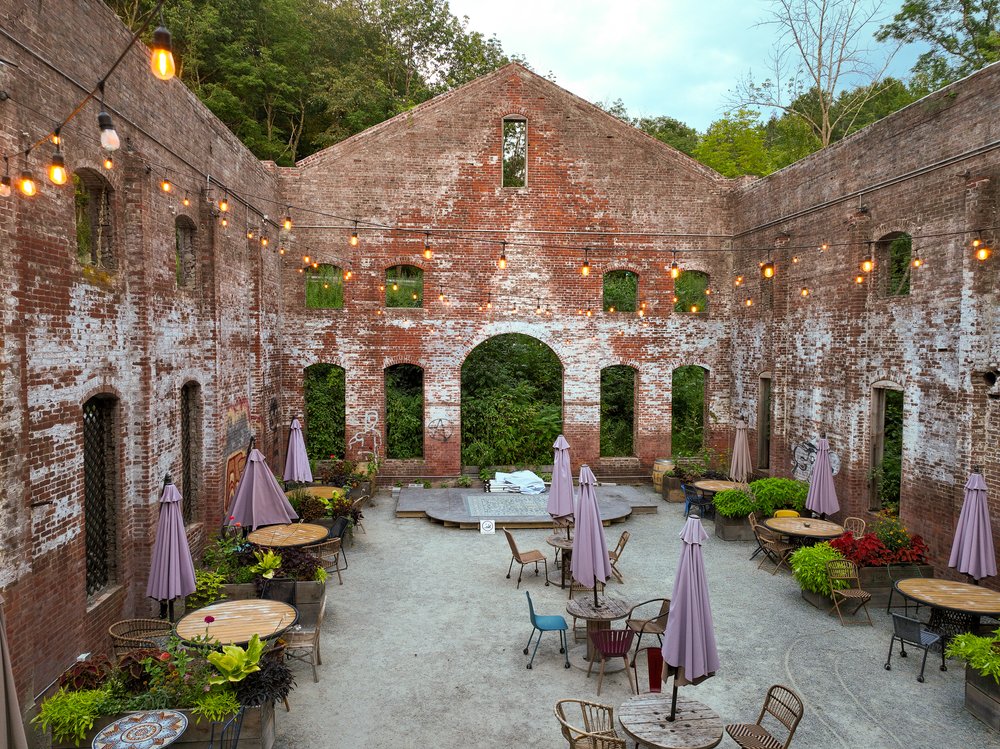 Once stabilized, the brick shell became a hot spot for good music and good food and drinks served up from two upcycled shipping containers hauled onto the site and converted into a kitchen and bar, respectively. 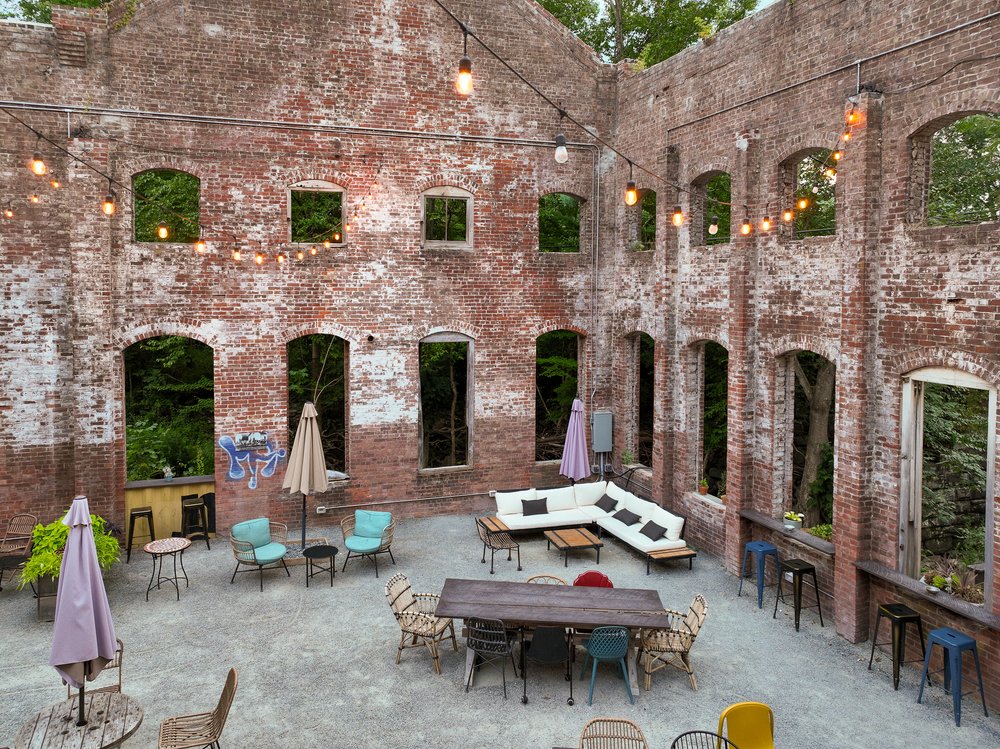 Comfy couches, sturdy stools, and inventive dining sets soon filled the space that once ran with liquid gold. The effect is crisp and clean, with literally nothing except windowless “windows” separating guests from the natural world just outside the brick shell. 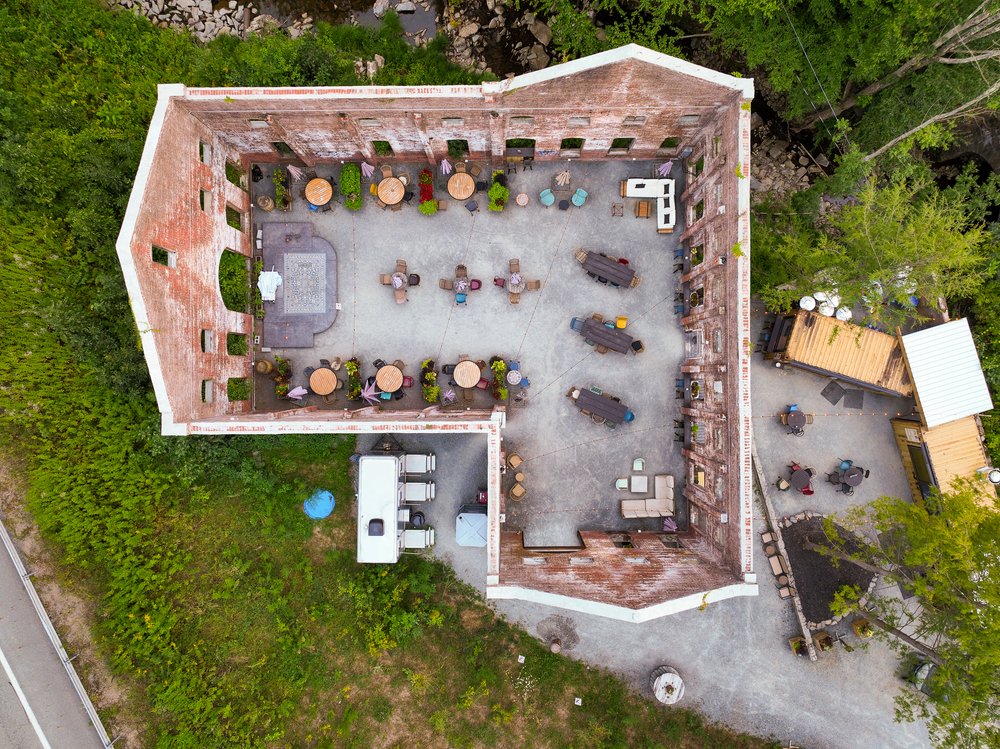 This aerial view spells out the property’s layout, with the food/drink spots (plus a comfortable restroom trailer) located just outside the shell. 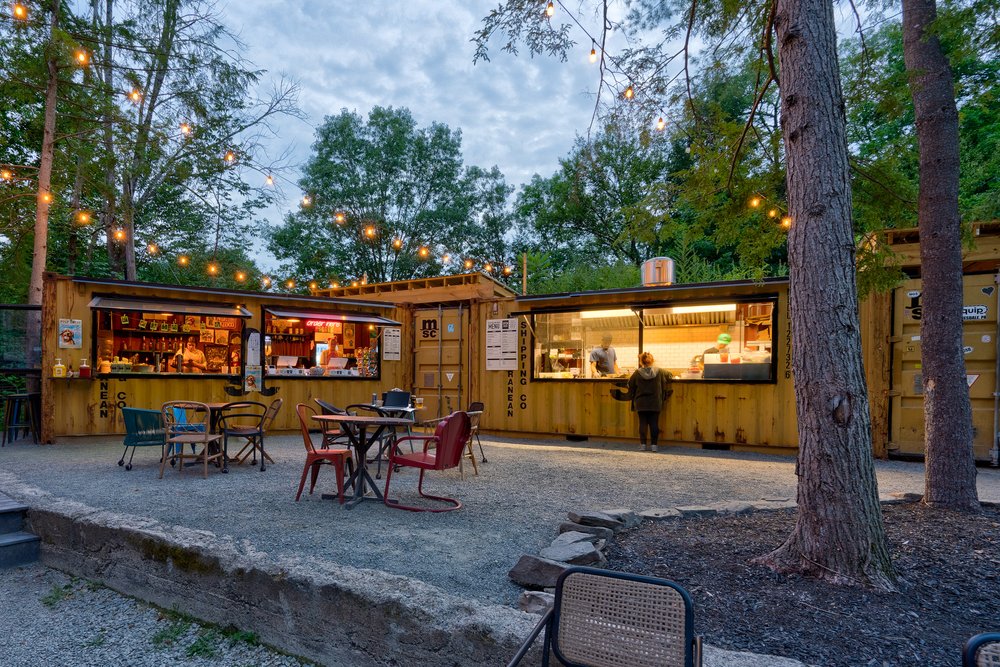 Seating space is plentiful whether diners want to sit near the music or near the booze. 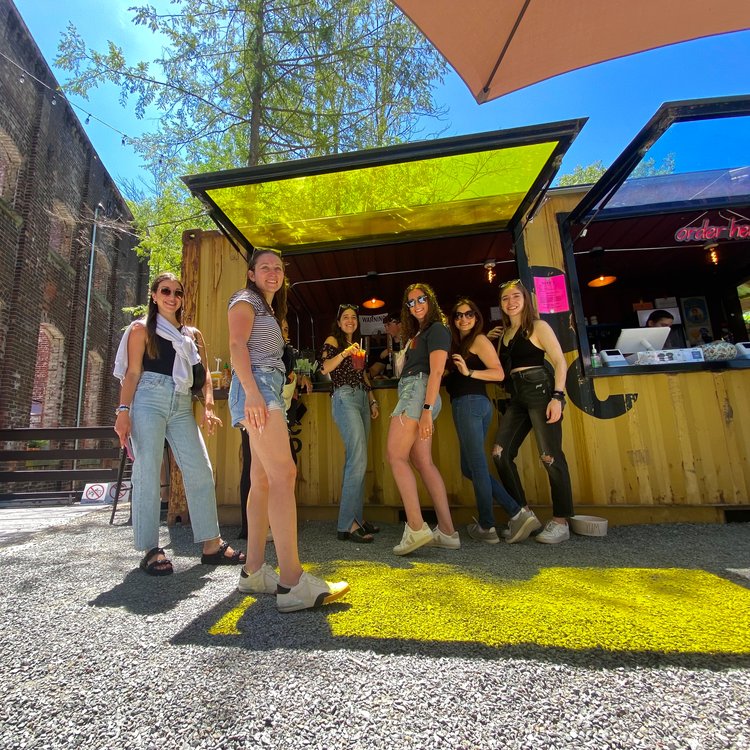 And it’s pretty as well as functional. 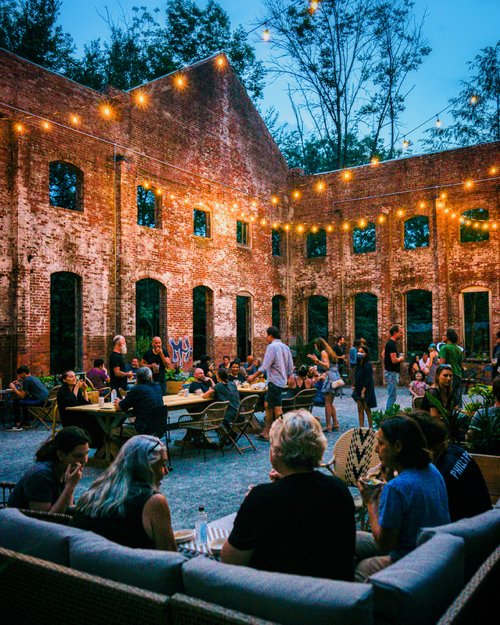 Edison lights sway overhead, complementing the moonlight and starlight that pervade the summer nights when capacity is at its height. 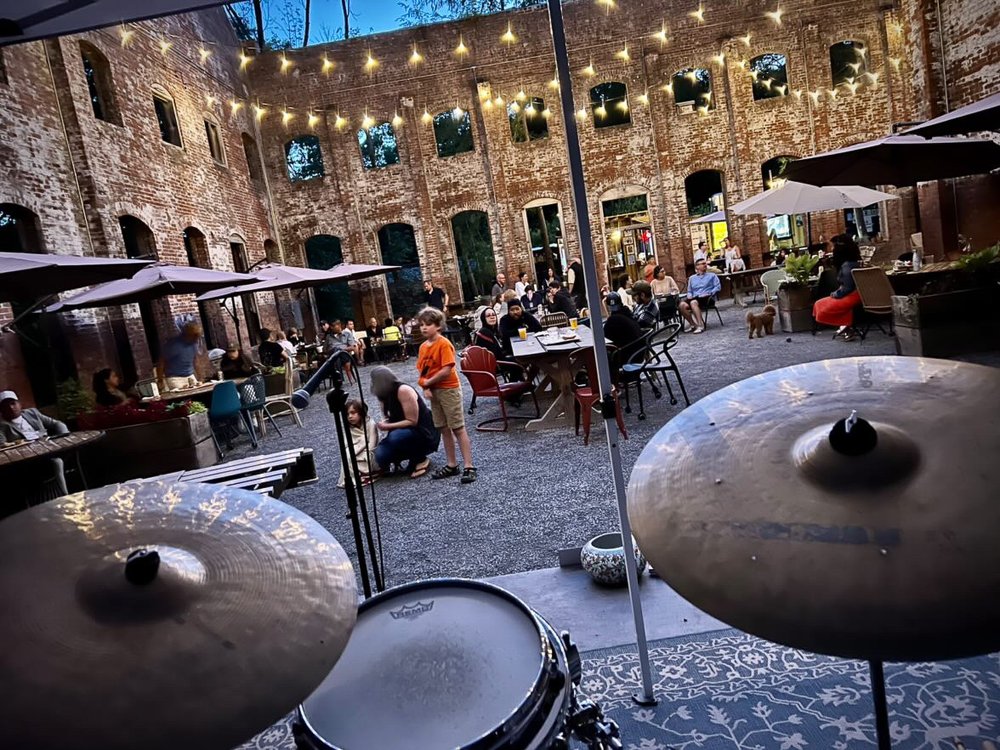 A stage offers unobstructed views of the appreciative audience. 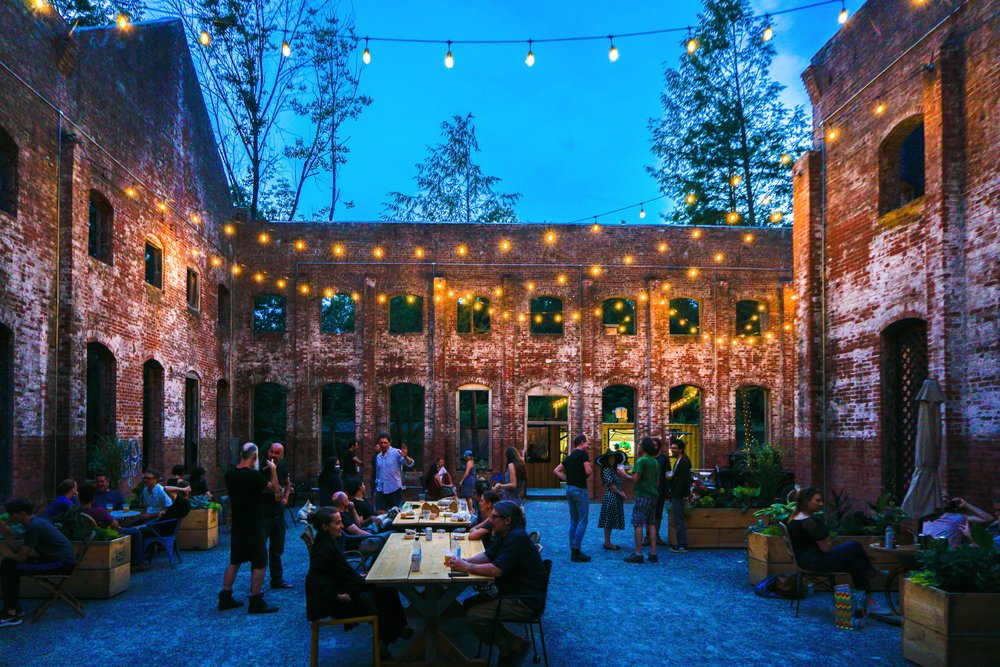 And man…when your venue has no barrier between you and the great outdoors, that blue hour just can’t be beat. 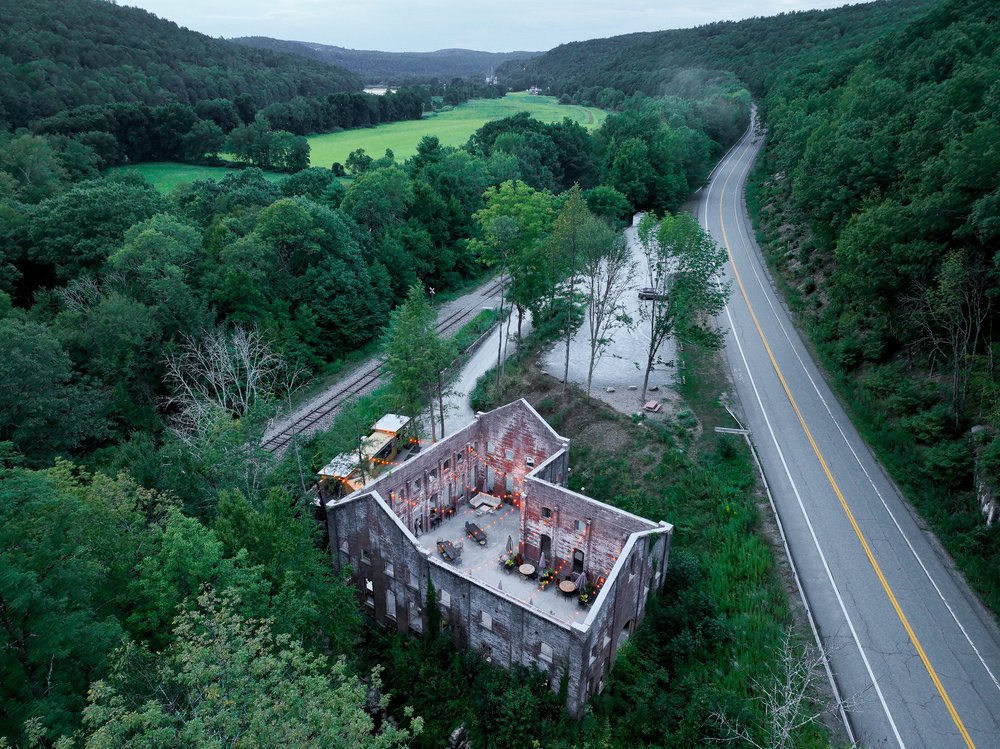 The whole shebang is conveniently situated along Route 97, close to an intersection with County Road 116 and between Narrowsburg and Callicoon. 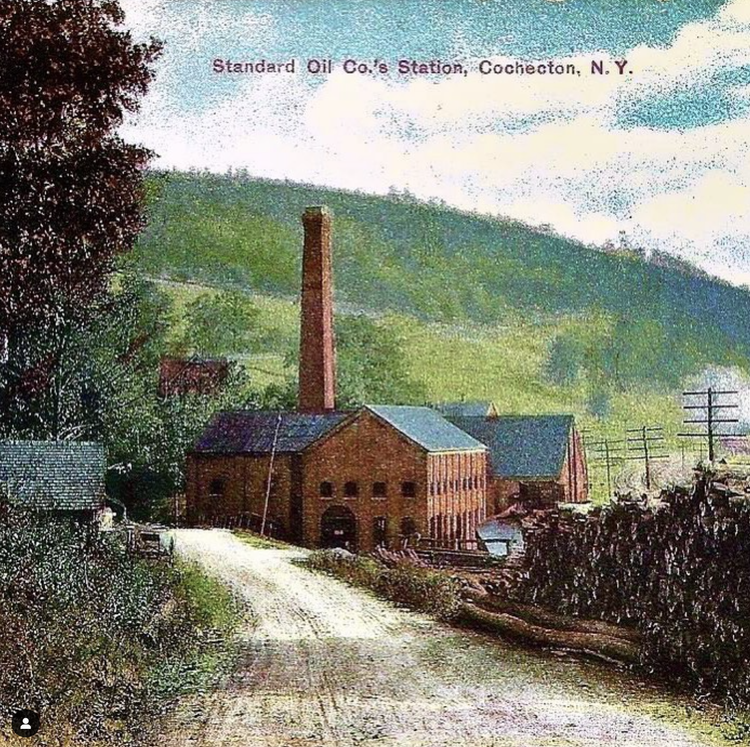 In case you’re wondering what it used to look like with a roof, here’s a postcard of the Pump House in its relatively short-lived heyday. If you’re ready to breathe new life into this airy hotspot, check out the Cochecton Pump House with Erik Freeland of Country House Realty.