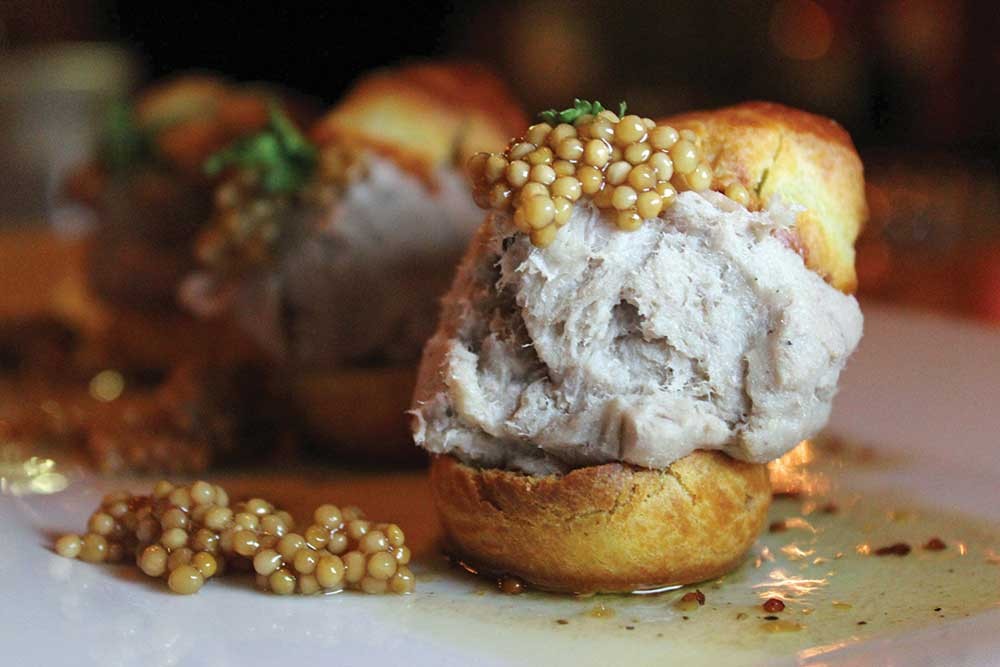 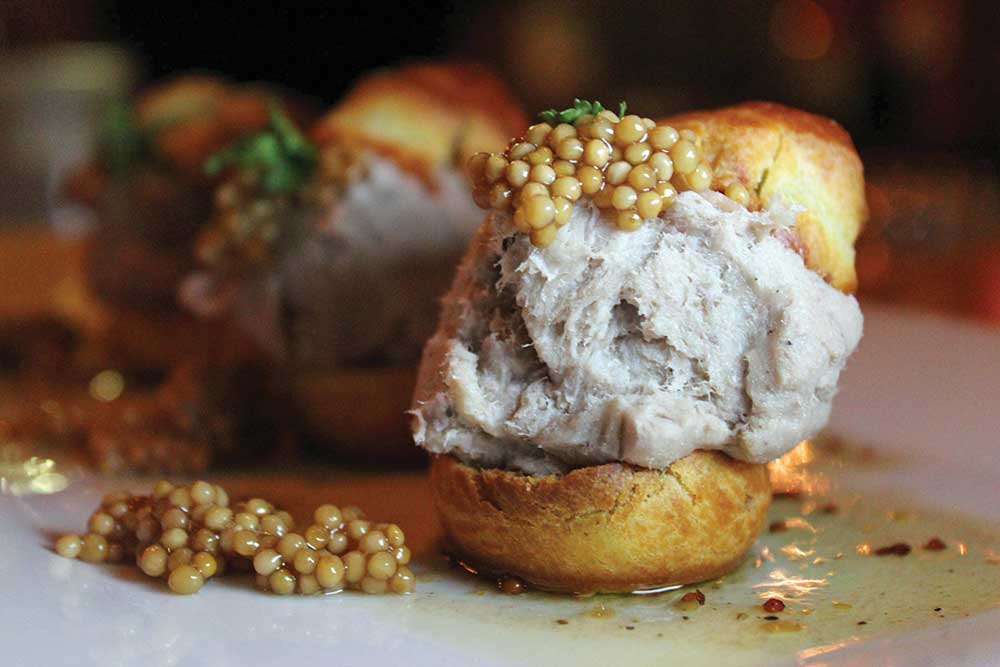 At the very heart of the farm-to-table movement lies a profoundly simple and beautiful notion: that we should care as much about where we actually source our sources of nourishment as we do about how the food on our plates is prepared. This means much more than being able to cite the particular farm that originated any particular bushel of corn. Instead, it means being aware of the conditions under which our food is raised, grown, and harvested. In an ideal situation, farm-to-table means a symbiosis between the farmer and the chef, with the menu not only being driven by the crops, but also with crops being planned with a specific kitchen and audience in mind. A brief journey through the Hudson Valley as summer unfolded revealed a few venues that seem to embody precisely this keen food awareness. 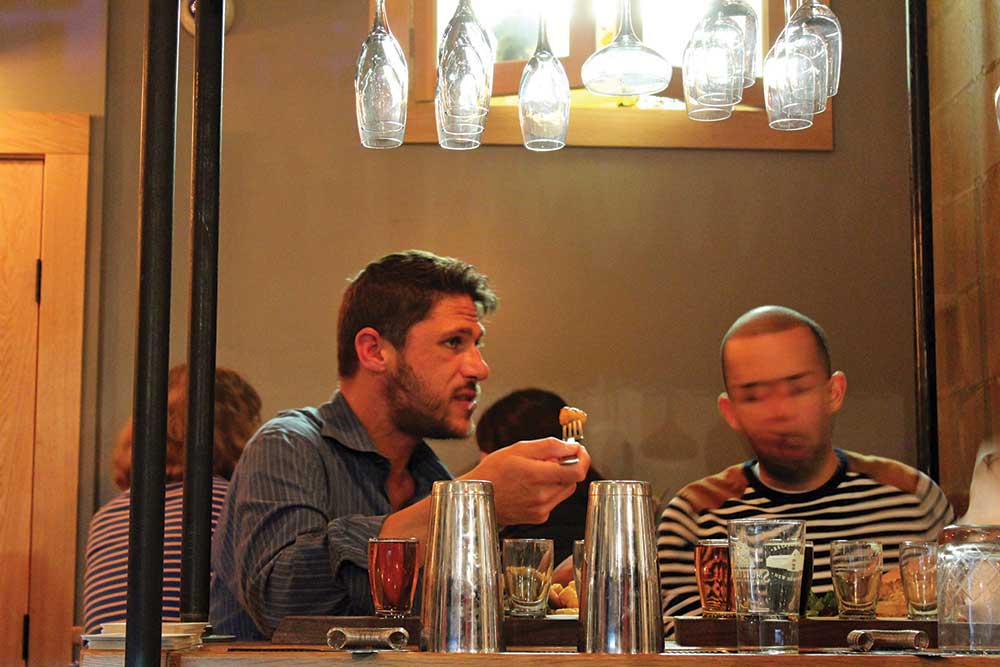 “We thought we were opening a beer store,” chuckles John Kelly, “but it ended up being a restaurant.” Kelly, owner of The Hop in downtown Beacon, was ready when the time came to transfer his craft beer store down the street to its new, larger location. Situated by the railroad tracks that run alongside a rushing waterfall on Main Street, the store is part beer shop and part eatery. One bite of a Pork Puff could make you forget the selection of nearly 200 beers shelved behind you in wooden cases. These profiteroles are tiny pastry clouds stuffed with pork rillettes, mustard caviar, Jersey Girl cheese, and a tangy mustard sherry vinaigrette. A platter of house-made pickles washes down deliciously with a pint as well. Or go simple with locally raised filet mignon accompanied by fingerlings sautéed in duck fat with rosemary, leeks, and herbed bone marrow.

Fish & Game is not just a James Beard-nominated destination for the savvy diner. This 19th-century former blacksmith-shop-turned-restaurant in the heart of Hudson feels like a rustic hunting lodge. There are jars of vegetables pickling on shelves spread between mounted busts of stag and ram, bouquets of herbs dangling from the ceiling, lush red velvet wallpaper, crates of root vegetables, and a stone hearth set before an open kitchen. Chef Zakary Pellaccio’s hands, which successfully labored at Fatty ’Cue and Fatty Crab in Manhattan, are now growing their own crops and arranging them in a weekly rotating set menu based on the freshest ingredients in the valley. Fish & Game serves a set Classic American menu for Friday, Saturday, and Sunday dinner, and offers à la carte for Thursday dinner and Saturday and Sunday lunch. Featured on the set menu is kid goat, smoked to tender perfection before being rolled with kimchi into ramp leaves for spicy summer cannelloni. Marsh marigold buds even morph into Hudson Valley capers. The river and sky are the limit in this gallery of comestible artistry. 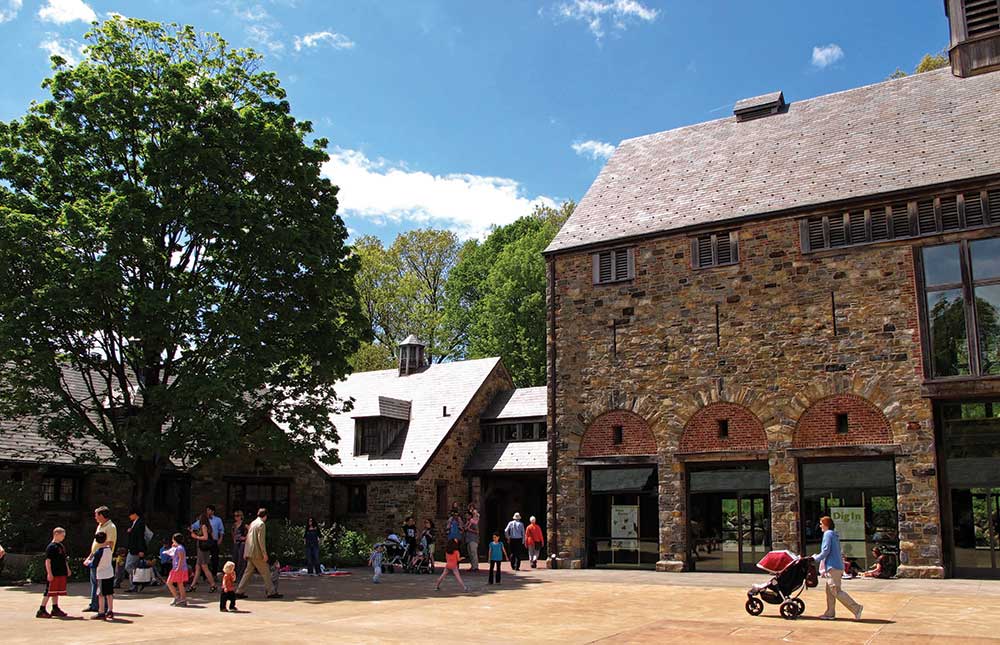 Perhaps the most well-known farm-to-table restaurant in New York State (maybe even in America), this location of Dan Barber’s Blue Hill, set in the rolling countryside of Pocantico Hills outside Tarrytown at the Stone Barns Center for Food & Agriculture, is perhaps the best-known farm-to-table in the world, having recently ranked as no. 49 in the 2015 World’s 50 Best Restaurants. The restaurant sits at the heart of what many consider the epicenter of the locavore movement, so do not simply stop at a mere reservation in this flawless restaurant. Embrace the classroom of the field with tours, classes, even a farm camp that provides engaging ways to learn about the joys and rigors of the field and pasture in one of the most lush, engaging, and breathtaking settings around. Then feast on buttery filets of tenderloin coiled with fiddlehead ferns, lick lollipops of sesame-kissed asparagus, and finish with a shot of fresh, creamy milk harvested earlier in the day and flavored with chocolate. 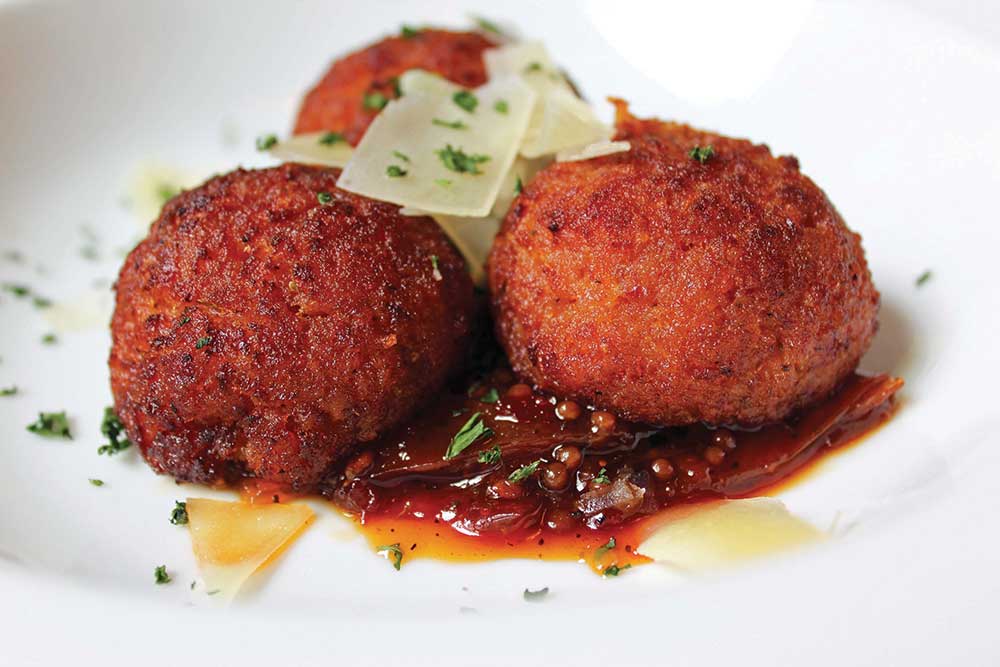 “We think of ourselves as less farm-to-table than what is simply fresh and available,” explains Oliver Cullen, owner of Prohibition River in downtown Nyack. Regardless of how you label it, there are some inventive ingredients and techniques employed in this two-story gastro-pub with a sweeping federal staircase to the upstairs sun-drenched dining room and bar. Bacon meatballs arrive in a pool of sweet tomato chutney with fresh Parmesan shavings. Bites of cauliflower receive the Buffalo treatment with bleu cheese crumbles and fresh herbs. A 24-hour braised pork belly is even finished with a 60-minute egg prepared sous vide. Slow and steady wins the race at this popular public house. 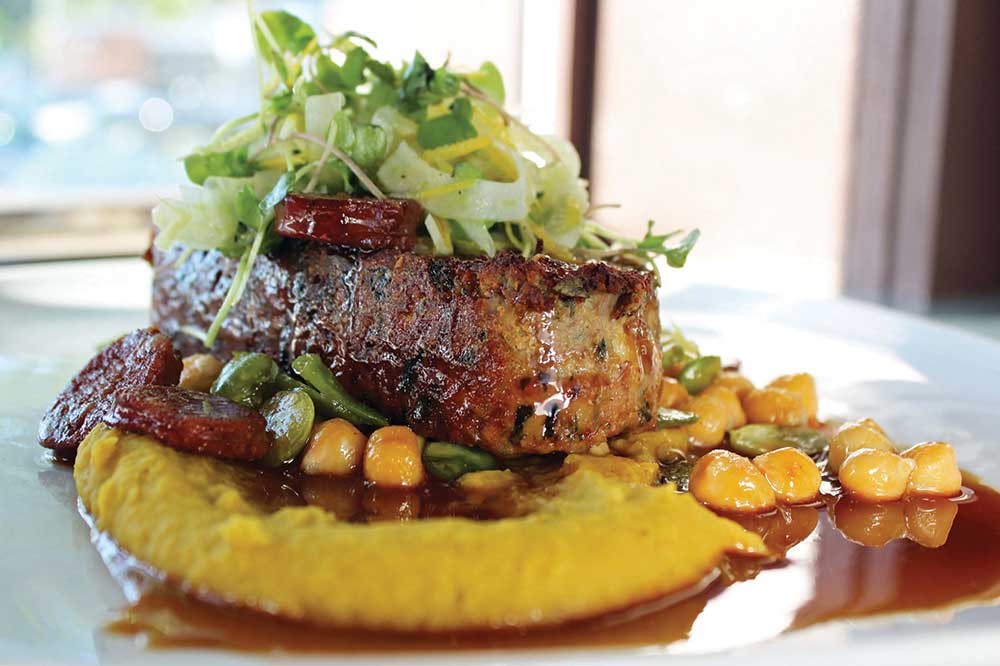 “I like to play with ingredients depending on the weather,” confesses Nathan Snow, chef and co-owner of The Huguenot in New Paltz. The midnight blue dining room adorned with vintage farm tools is a handsome nod to the ideals of the restaurant. “Our proteins are 100 percent from Karl Family Farms, which is just six miles down the road,” explains Snow. A deep-fried, soft-boiled duck egg sits on a bridge of crisp asparagus over a moat of chorizo country gravy. An exquisite meatloaf, made from lamb, is served over fresh fava beans and a puree of curried chickpeas with lamb sausage. “We are so fortunate to get to plan the crops,” says Snow, “developing recipes before their ingredients are even harvested.” 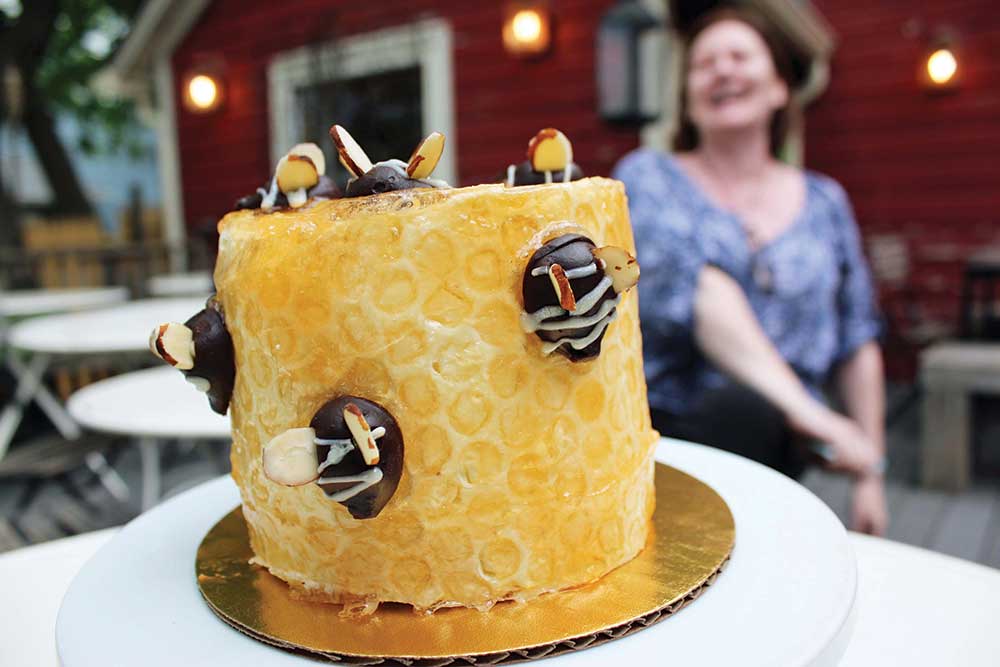 Agnes Devereux smiles and steps out of the kitchen, motioning for a guest to follow her outside The Village Tea Room in downtown New Paltz. “Most people don’t even notice this,” she sighs, gesturing toward the sign over the side doorway indicating the building was once the town’s tailor shop. It’s rather impressive that a building constructed over two centuries ago now survives on Devereux’s passion for history and tradition as well as her devotion to local farmers. Back inside, she delivers a plate of pecan tassies and confectioner’s sugar-dusted madeleines, along with what appears to be a fluffy piece of quiche. “Now try this,” she says, and then swiftly leaves the room. After just one cautious bite, the buttery-crusted Potato Toussaint Cheese Tart is rapidly devoured. A slice of Honey Bee Cake follows, layered with apricot preserves, honey butter cream, and chocolate truffle bees with almond wings. It’s obvious what all the buzz is about.

Another Fork in the Road

At a passing glance, this restaurant appears to be a maroon schoolhouse from the 1940s tucked into a bend on Route 199. But blink and you might miss Another Fork in the Road, one of the most modestly wonderful dining rooms around. The counter and bookshelves are adorned with locally made jams and statues of gnomes. Despite the naïve country façade, however, there is some serious cooking going on. “This didn’t exist before it was ordered,” explains chef Jamie Parry as he serves a bowl of soft, warm, black pepper-dusted mozzarella stretched moments ago, now glistening in olive oil. “Our menu is veggie-forward,” explains the Montrachet-trained chef, “and we use local produce.” That includes a playfully tart rhubarb on a warm country biscuit, blanketed with sweet lemon curd and fresh whipped cream.