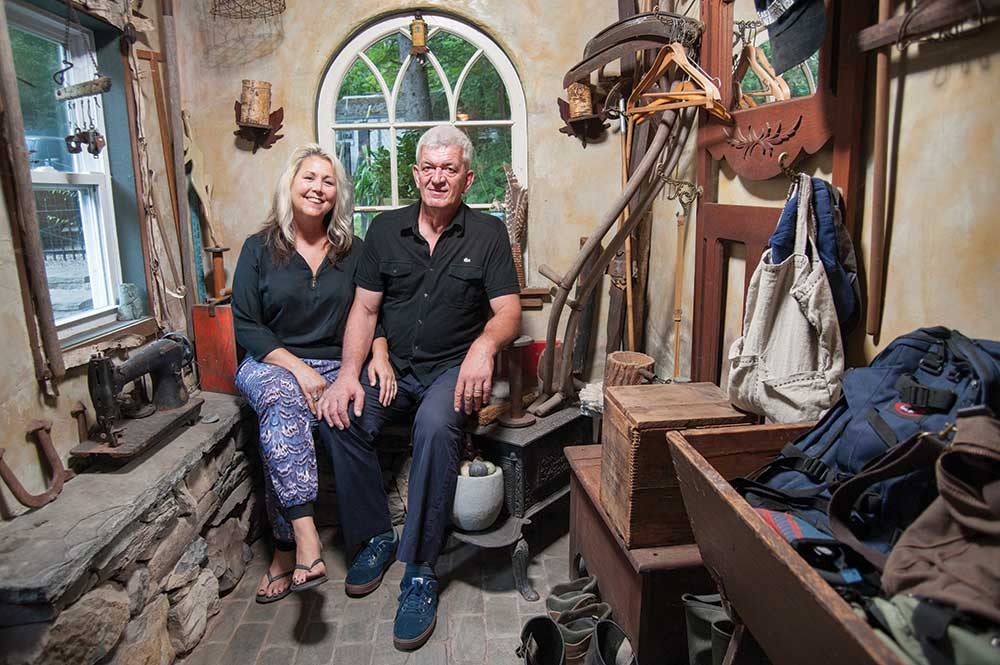 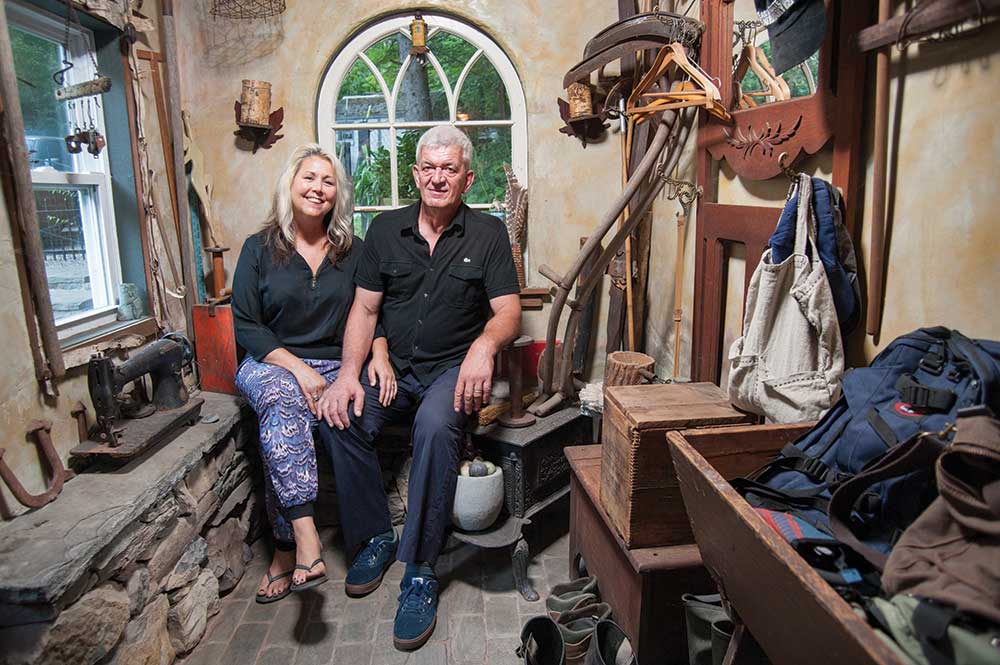 Hometown: Huntington, West Virginia, and Poughkeepsie (Padovani); Turin, Italy (Rebaudengo)
Lived in Hudson Valley since: 2003
Moved to Hudson Valley from: The East Village (which is still Lisa’s primary residence)
How they met: “Paolo was visiting a mutual friend of mine,” says Padovani. “I believe we were set up unknowingly because it was a dinner party for 12”—at Al Di La Trattoria in Brooklyn—“and he was the only one sitting at the table when I arrived, even though I was a half-hour late. He was so nervous that he stood up too quickly and hit the table with his legs, and all the silverware and glasses fell over and created a real racket. When everyone in the restaurant turned around to see what was going on, he became embarrassed and sat down too quickly, hitting the table with his legs and creating the same racket again. It was pretty charming, so I decided to sit next to him.”

It makes perfect sense that a couple composed of an award-winning costume designer, known for her attention to historical detail, and a traditional Italian stonemason, known for his appreciation of indigenous architecture, would end up in Kingston.

“The history here is definitely one of the things that attracted us,” says costumer Lisa Padovani, whose many accolades include Emmy nominations for her work on runaway-hit historical TV shows like “Boardwalk Empire,” “Mad Men,” “Oz,” and, most recently, “Gotham,” as well as films like I’m Not There, Party Monster, The Notorious Bettie Page, and the 2006 Oscar-winner The Departed. Her husband, Paolo Rebaudengo, runs the local masonry firm Piedmont Stoneworks, named for the region in the Italian Alps where he learned his craft.

“I’d actually gone to Arlington High School in Poughkeepsie,” Padovani says. “So I already knew the Hudson Valley was a beautiful area with lots of historic places.”

For the past decade, the couple has owned an 1802 stone farmhouse nestled into a picturesque hollow on South Wall Street, a winding, countrified stretch of road between Kingston’s storied Uptown and Rondout districts. “It’s pretty funky, with low tin ceilings that date from a 1902 renovation—originally, the owners would have kept their animals downstairs, partially for their own warmth,” says Padovani. She stays at the couple’s East Village apartment at least five days a week for work, while Rebaudengo lives upstate full-time, visiting her in the city whenever he can. “We wanted to be somewhere that was a little bit country, but not too country,” says Padovani. “Being able to walk to restaurants and shopping was something we would miss, so it’s great to be somewhere where you can do that.”

The house’s construction appealed to Rebaudengo, who was a professional volleyball and rugby player in Italy before studying under master stonemason Federico Turinetti. “It’s basically the same type of construction as the old stone houses in the mountains where I grew up,” he says. “I’ve added a patio and some other things, but we haven’t changed it much.”

The biggest lures to Kingston for the couple were its convenient proximity to New York and its thriving arts scene. “We love that Kingston’s been attracting artists that run the full gamut,” Padovani says. “Painters, writers, musicians, sculptors—we’ve met all kinds of really creative people living here. But I do wish it would realize its potential in terms of making commercial property rentals more accessible, so that it could be following the leads of places like Hudson or Rhinebeck more quickly—I still see a lot of empty storefronts around here.”

Perhaps Kingston, would do well to follow in the footsteps of Nucky Thompson, the lead character of “Boardwalk Empire.” “He would immediately start shipping liquor up the Hudson, and probably put in a boardwalk, rides, sideshows, and casinos to attract tourism,” Padovani muses. “Steve Buscemi [who played Nucky] actually does have a house up here, so there is a six-degree connection.”

But Kingston’s lingering sluggishness aside, Padovani says she and Rebaudengo love their place in the Hudson Valley. “Even though I’m still in the city most of the week, at this point, the bulk of my and Paolo’s friends are up here,” she says. “And most of them are New York expats, just like us.”