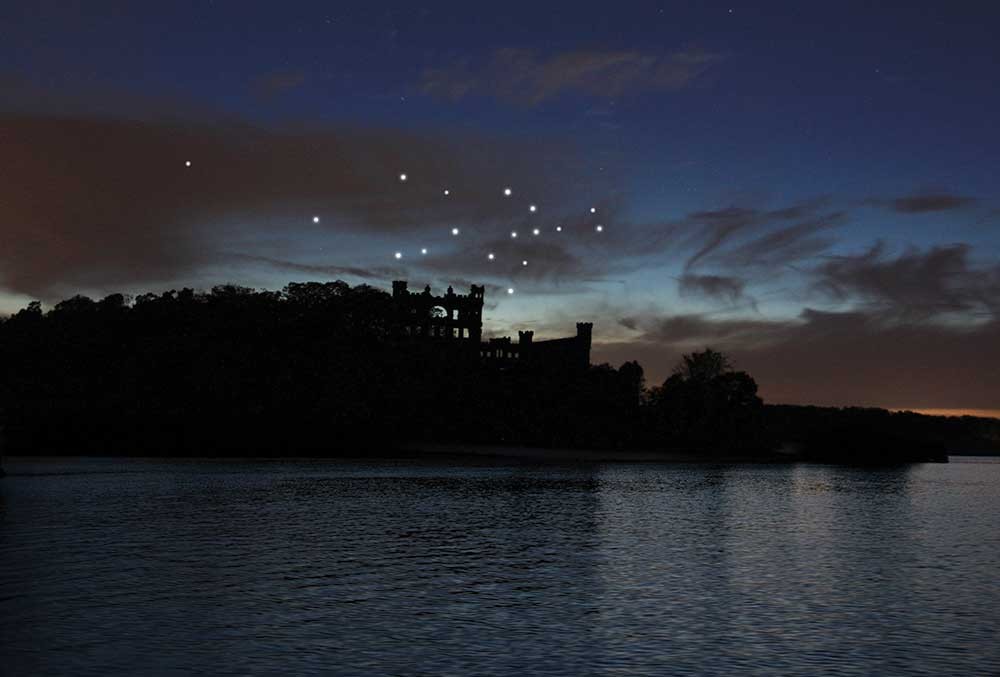 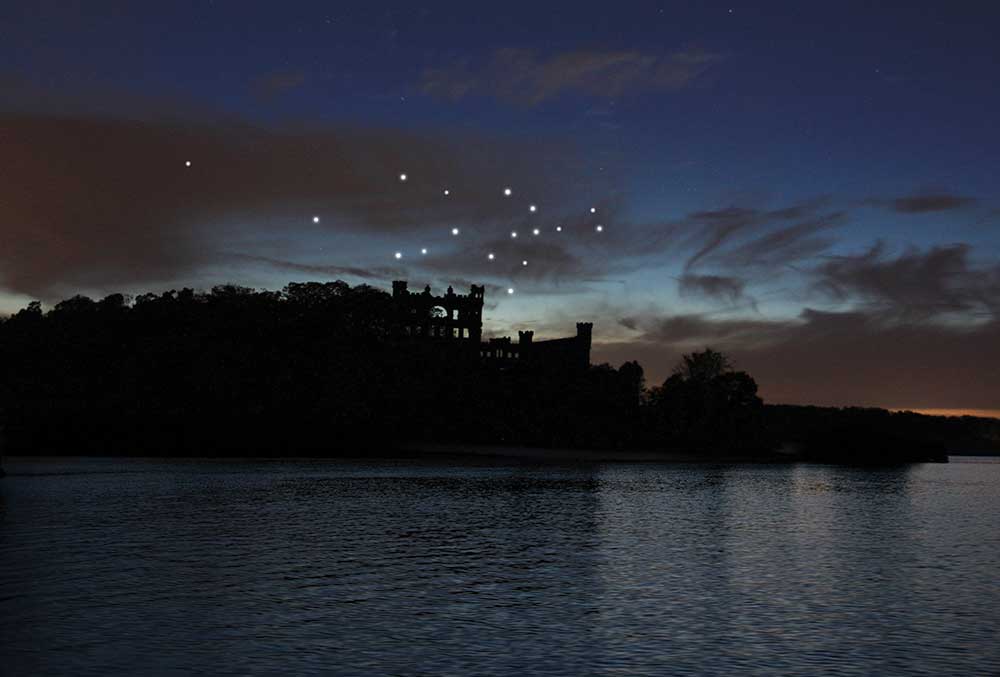 After moving to Beacon in 2007, artist Melissa McGill became fascinated by the ruins of Bannerman Castle, which appear in the windows of the Metro-North train like a medieval Flemish fantasy. The shape of “Constellation,” an installation on Pollepel Island, located near Beacon in the Hudson River, is based on the original outline of the castle, but is not a precise rendering. The project, which took almost three years to complete, launched on June 28 and will remain up until the fall of 2017.

Seventeen tapered aluminum poles, each holding a single LED globe, rise above the ruins to 40 to 80 feet. Every evening, the lights are illumined, one by one, remain lit for two hours, and then fade away. This is crepuscular art, tracking the shadowy transition from day to night. “Constellation” is a trick of perspective: In the night sky, a 60-foot-high globe looks as distant as Alpha Centauri. The installation uses up-to-the-minute engineering—including solar panels and a computer program—yet points upward to the stars, which maintain the same technology eon after eon. McGill’s work is magnified by the surrounding darkness, seems larger than it is, and is cosmically persuasive.

“When I met my friend Hadrian Coumans of the Lenape Center [a nonprofit organization in Manhattan whose mission is continuing the Lenape cultural presence], I told him about the project, and he said, ‘You’re making Opi Temakan!’” McGill reports. “I said, ‘What’s Opi Temakan?’ And he said, ‘That’s the White Road. The stars are the Milky Way that connects this world to the next.’”

Bannerman Castle was built in 1901 by a wealthy Scotsman who made his fortune buying up Union Army military surplus after the Civil War. Francis Bannerman VI stored his munitions in Manhattan until the city government ordered him to vacate. Finding Pollepel Island on a canoe trip, Bannerman envisaged a Scottish citadel made from concrete and brick. Although the building was perennially under construction, Bannerman and his family lived there for several years and hosted boys’ summer camps there. A fire in 1969 reduced the edifice to ruins.

“I’m very fortunate to have some amazing poets as friends,” remarks McGill. A forthcoming book on the project from Princeton Architectural Press will include poems by Edwin Torres and Pulitzer Prize-winner Tracy K. Smith, as well as “One Today,” Richard Blanco’s poem, which was read at President Obama’s 2013 inauguration.

“Constellation” will be installed until fall of 2017. To see the installation from every angle, you must take a boat. Bannerman Castle Trust organizes boat tours and Storm King Adventure Tours provides kayak tours. A free downloadable audio tour is available at MelissaMcGillConstellation.com. Distance will profoundly affect one’s view of “Constellation.” From a kayak next to the island, you’ll probably see the globes, whereas from Newburgh they’ll look like 17 newly risen stars.