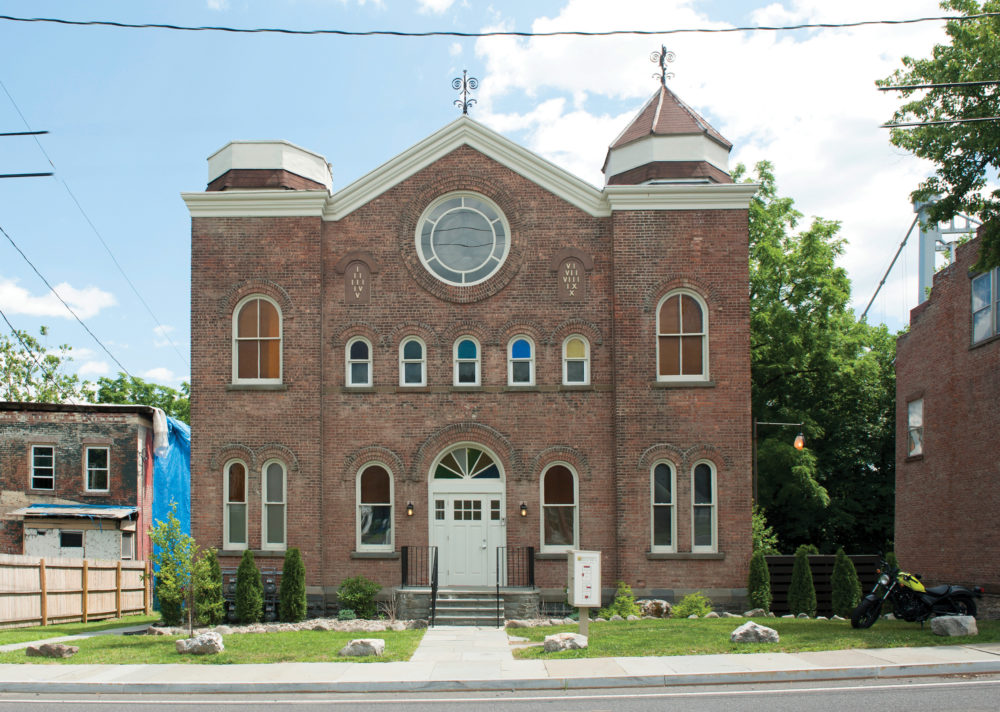 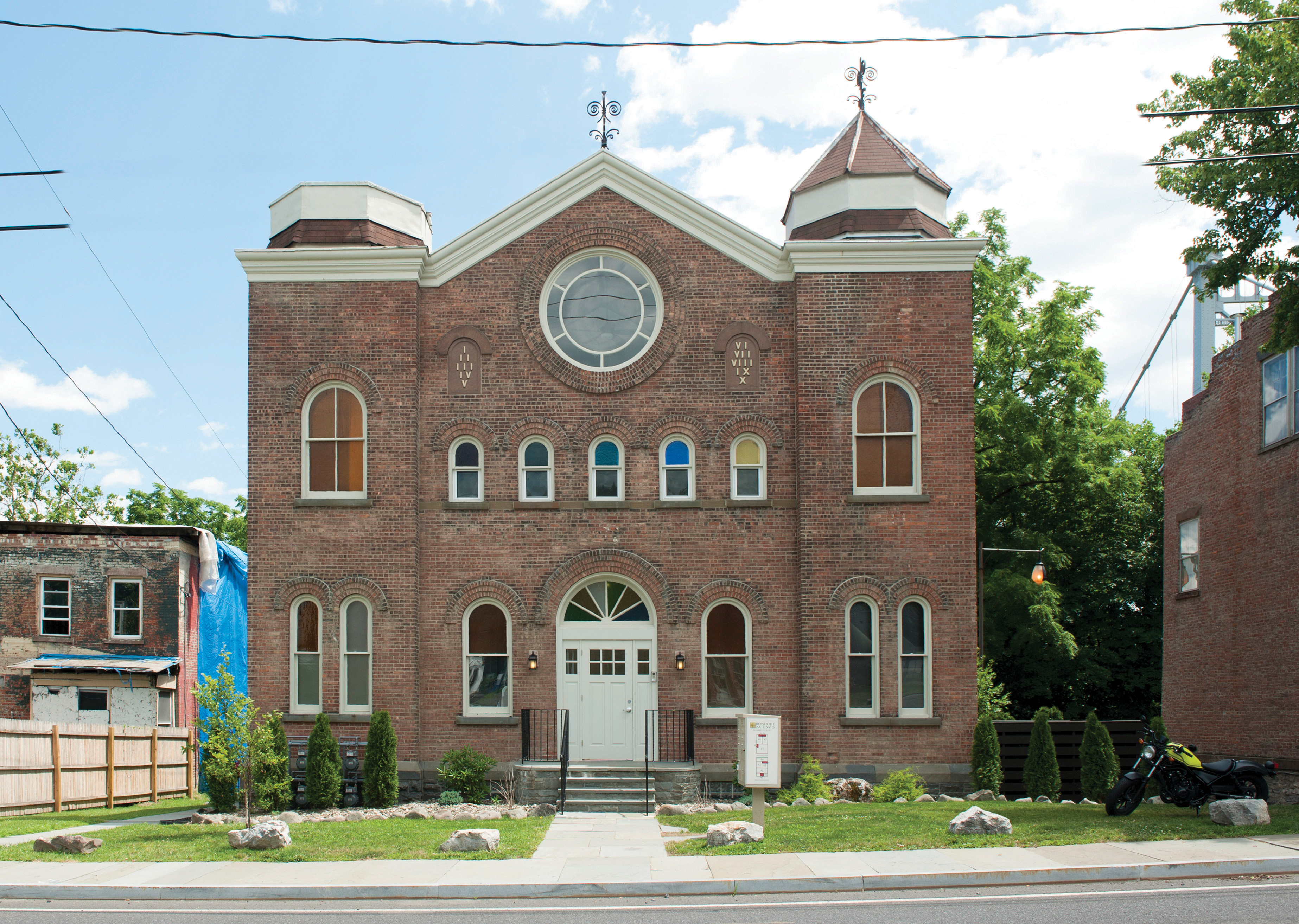 Artists Neville Bean and Harris Diamant fell in love with the Rondout Creek Bridge in Kingston’s Rondout Historic District during the winter of 2015. They were standing before the large windows of 50 Abeel Street, looking out at Kingston’s waterfront. The old brick building was raw and gutted at the time. Bean remembers viewing the dramatic sweep of the 1921 steel suspension bridge, which connects Kingston with Port Ewen, and thinking, “Whatever they do in here, that view of the bridge is the thing.” Thus began a collaboration between the artists and the building’s developer and architect on a tailored live/work space for two.

Bean is a designer whose work encompasses jewelry and graphic design, product development, trends presentations, and advertising props construction; Diamant is a sculptor, builder, and pioneering American folk art dealer who  discovered an important collection of drawings by outsider artist Edward Deen. The couple collaborated on a monograph and mini-documentary, The Electric Pencil, about Deen’s life and work.

Bean and Diamant were among the first tenants to contract for an apartment at 50 Abeel Street, renamed Rondout Mews. “We were on the verge of losing our studio space in Chelsea,” Diamant explains. “We began investigating towns, mostly in the Hudson Valley, because we have friends here.” Moving from their railroad apartment in New York City’s West Village and shared studio in Chelsea, the couple combined their home and workspace in Kingston.

Like many buildings in its neighborhood, Rondout Mews has led many lives. Built in 1892 with bricks made at the nearby Hutton Brickyards, the building was home to Temple Emmanuel until 1958. A circular stained-glass window was removed in the 1990s and steel beams were installed to create a dance floor for a bar. Eventually, the building sat empty for about a decade until Kingston developer Mike Piazza bought it for an adaptive-reuse project. 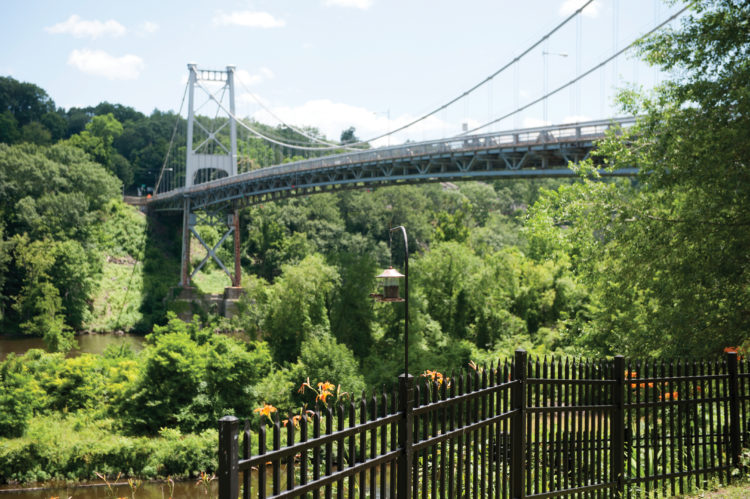 Piazza retrofitted the building into seven apartments, three of which feature outdoor areas. “We tried to work with the building structure as much as possible,” says project architect Paul Jankovitz. “Every unit is unique because of the original layout of the building.”

While exploring the idea of Bean and Diamant renting two apartments at Rondout Mews, Piazza offered them the option of creating a duplex or conjoining two side-by-side, mirror-image apartments. The couple liked the latter idea, which meant eliminating stairs from their lives and having the deck outside the two apartments all to themselves.

During the year it took to build Rondout Mews, Bean and Diamant frequently took the bus upstate to offer suggestions, including tile colors for the radiant-heat flooring and a deep tub for one bathroom. They also requested shower rails, and Piazza provided a fully American Disabilities Act-compliant second bathroom. 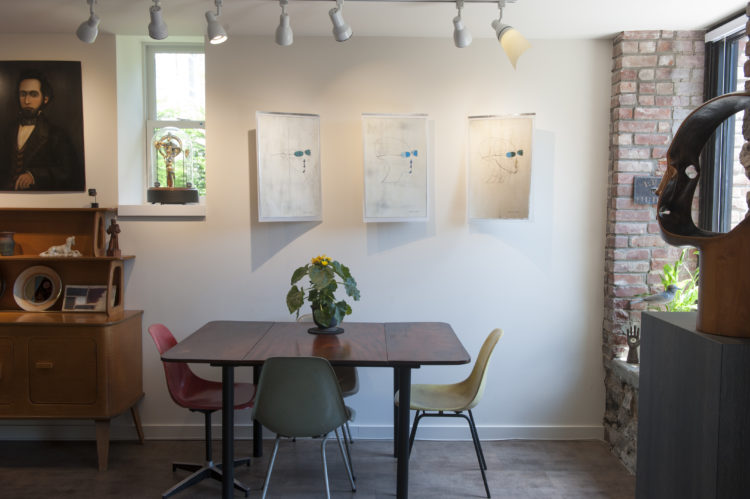 To combine the two apartments, open space was left between the two living rooms, and a reinforced wall was built around one area, with additional power and specialty lighting installed, to create Diamant’s studio. Bean’s studio is located in place of one apartment’s kitchen—it has all of the necessary plumbing installed, but a studio sink is the only appliance hooked up. The live/work space could easily be converted back into two apartments.

The space’s main entrance, on the deck’s southern end, leads to a foyer and open-plan kitchen with an island overlooking the dining area. Two large windows—lined with folk art, plants, and one of Diamant’s handmade lamps—provide views of the bridge. The dining area opens into the living space, created by the two apartments’ conjoined living rooms. Work stations line two walls, with deep window ledges showcasing Diamant’s sculptures. The third wall is outfitted with a table showcasing one of Diamant’s large sculptural heads, and a photo light and backdrop allow him to create a photography studio when needed. The remaining space features two vintage theater chairs and a table made by Diamant. Twin hallways lead into two bathrooms and two bedrooms. Bean’s workspace completes the circle back to the front deck, and another picture window, also looking toward the bridge, displays her line of handmade jewelry, One.

Throughout the apartment are displayed vintage postcards of the bridge, Bean’s pottery, folk art, and Diamant’s sculptures, carefully lit with track lighting. Diamant designed and built much of the furniture himself, and there are artful displays of vintage functional collectibles throughout, including cast-iron pans in the kitchen and hats in the bedroom. With curated objects at every turn, the space feels as much like an art gallery as it does an art studio. 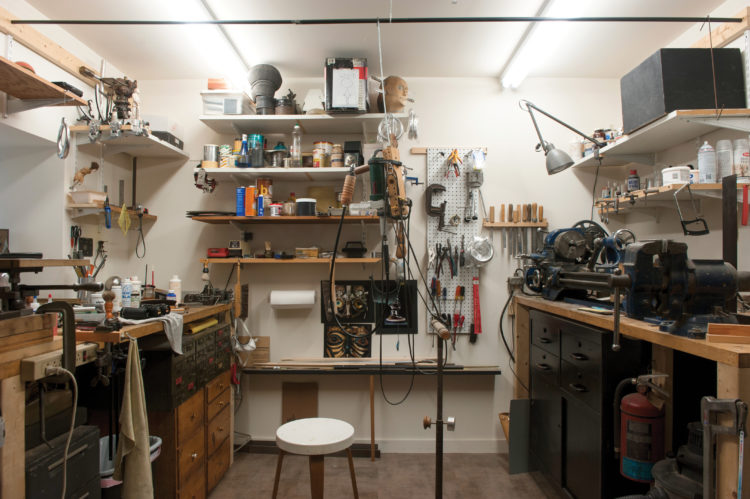 “My goal here was to show Harris’s work,” says Bean. Jankovitz “did such a beautiful job creating this fresh space with touches of the original exposed brick and beams,” she adds. The exposed steel beams offer extra exhibition space.

As a developer, Piazza specializes in adaptive-reuse projects, often gearing his properties toward housing for artists and makers: He’s created live/work facilities at the Shirt Factory, the Pajama Factory, and the Kingston Brush Factory in Kingston’s Midtown Arts District; currently, he is converting a former factory in the Rondout into Creekside Terrace apartments for artists and their families. “Lately we’ve been focused on more upscale tenants, with a good portion who are downsizing, or others coming out of urban areas to appreciate what Kingston has to offer,” Piazza says.

Jankovitz frequently designs Piazza’s projects. “The nice thing about working with artists is that they’re willing to take chances,” he says. “Once a couple of artists come into the building, they work together, and there’s synergy there. It’s a great environment to work in—lively, energetic.”

Yet there’s plenty of privacy at Rondout Mews. With separate entrances into each apartment, the building’s atmosphere feels small scale. “There’s a real sense of history here,” says Bean.

Diamant and Bean are especially fond of their deck, which is enclosed by a stockade-style fence. Bean established a garden on one side of the building, and she and Diamant planted trees on the other side to define the green space and decrease its exposure to the historic Company Hill Path, which runs alongside the building; in the process, they’ve created a miniature park. “Having a garden is such a cool thing for us city dwellers,” says Diamant. “In New York, we were 50 feet in the air.” 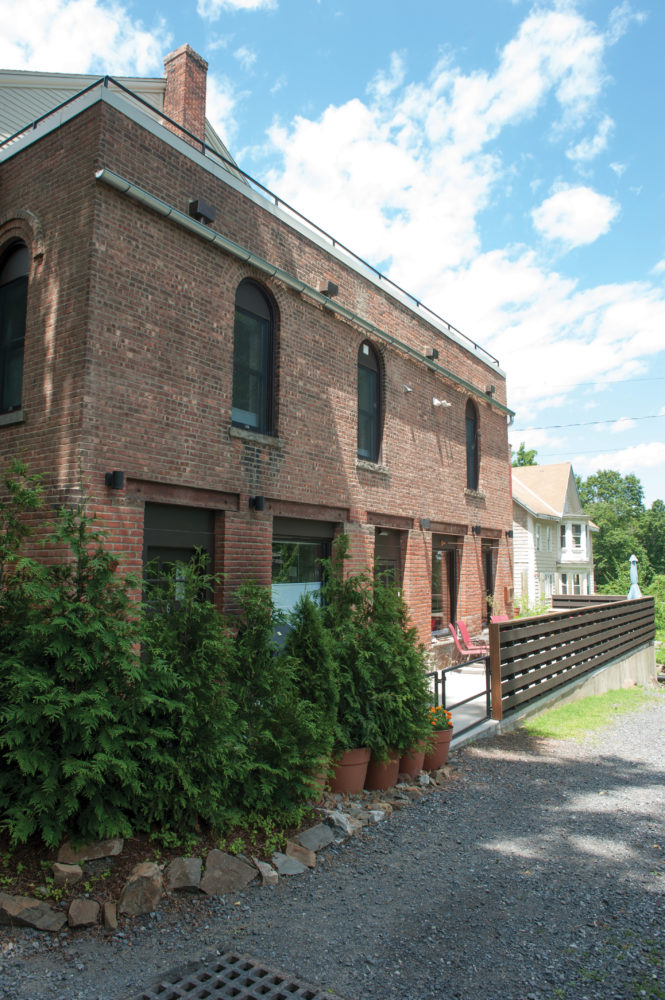 People regularly use the path for exercise, dog walking, or as a shortcut to waterfront restaurants, and they’re often curious about Rondout Mews, having known the building in one its previous lifetimes or watched its renovation. Since Diamant and Bean spend a lot of time on their deck, grilling dinner and relaxing, they frequently chat with passersby, sharing the building’s history. Occasionally, the couple is even asked for permission to walk down the path by visitors who don’t realize it’s a public area, and Diamant, who has a wry sense of humor, jokes that he always grants it. “There’s community here like none I’ve ever experienced,” he says. “People are so much easier to engage in Kingston.”

This story was originally published in Upstate House and was reprinted with permission.