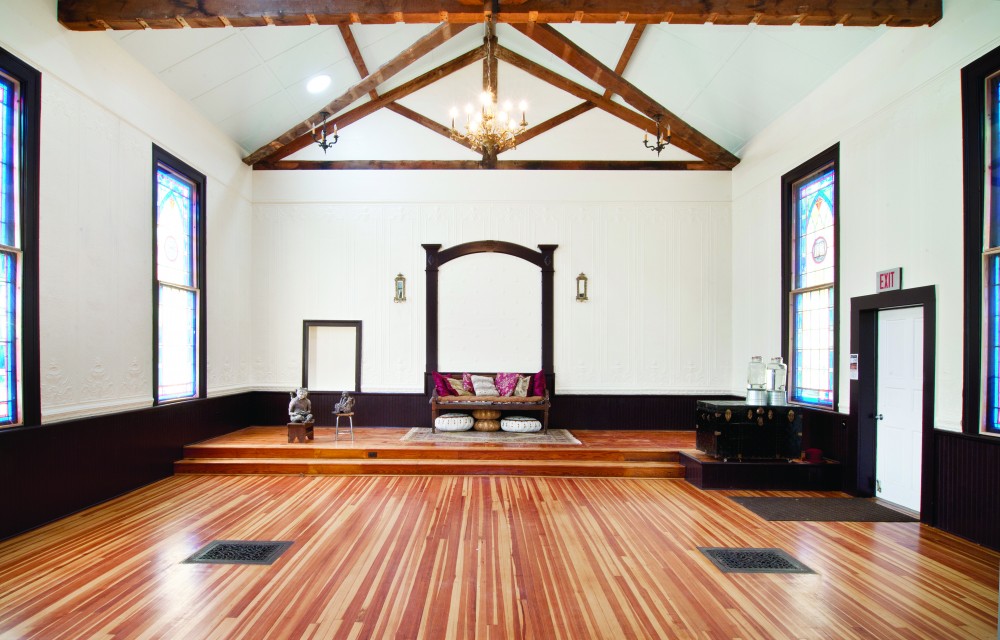 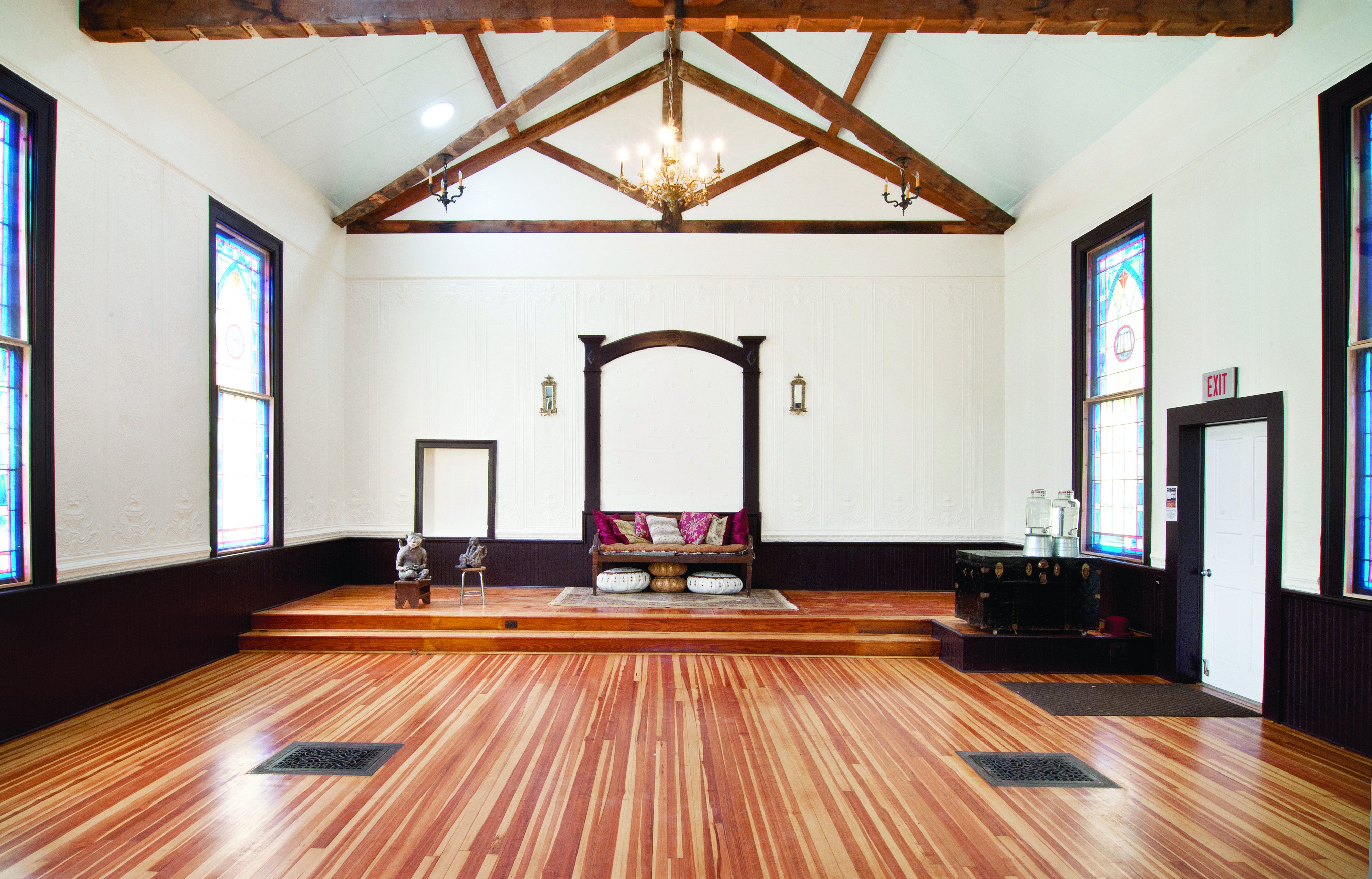 Every New Year’s Day for the past 14 years, Mor Pipman and Eric Hurliman have invited friends over for soup. It’s a tradition that began their first year of marriage. “We’d met and married in a whirlwind and then the holidays came,” Pipman remembers. “There was our wedding party, then Thanksgiving and office parties. It was parties, parties, parties—by New Year’s Eve we refused to go out. So we decided to stay home and make a pot of seafood bisque.”

The soup was delicious. There was also plenty to share, so the next day, January 1st, they invited neighbors over for an impromptu lunch. This was in the East Village in 2002, before gentrification and high-priced lattes, when Pipman and Hurliman were an integral part of the inter-generational, intercultural neighborhood. Pipman, a stone carver and ceramic sculptor, was teaching as well as organizing the local “M’finda Kalunga” community garden. “It was activism along with gardening,” she recalls, “and was all about creating community. We held classes where the neighborhood elders taught the kids gardening. We screened political movies. We celebrated everyone’s festivals—the Chinese harvest festival, Juneteenth, and the Sukkot.”

Their lives changed, but the New Year’s soup tradition continued. Hurliman became an RN and they had two children, Ulysses and Zephyr. In 2007, their growing family and a rat infestation on their block sent them upstate looking for a new home, and they discovered an old church for sale outside Woodstock. Originally built in 1865, the former Methodist-Episcopalian church was one of 10 congregations displaced by the building of the Ashokan Reservoir. It came to be known as “the stolen church of Glenford” because, in 1911, parishioners moved the church from the proposed reservoir basin to its current home in Glenford. 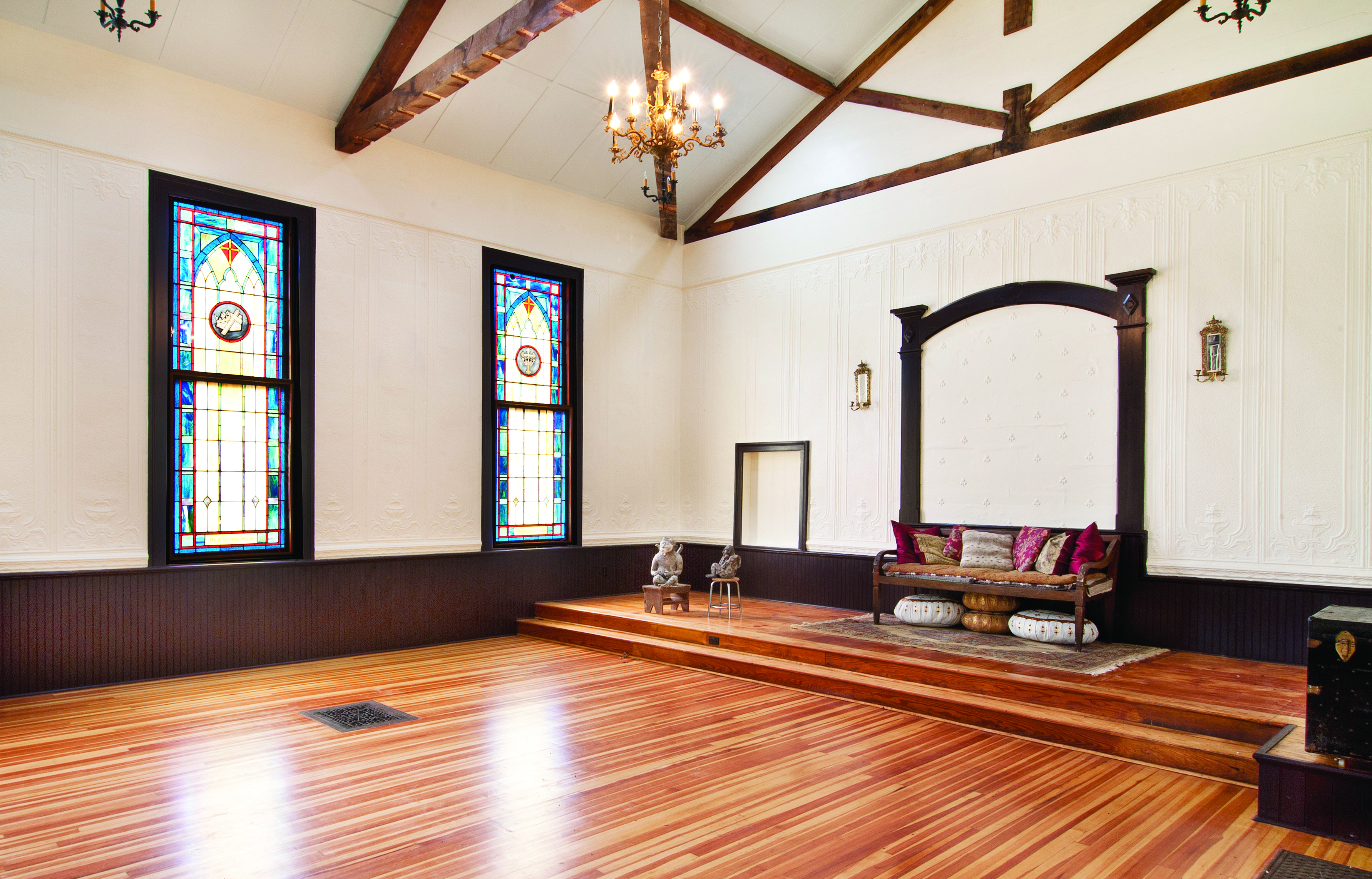 According to local historian Bob Steuding, the church grounds stood within the boundaries of the Ulster and Delaware Railroad, something disgruntled congregants noted when New York City took control. The railroad president offered the church building to the congregation “if they could only cart it away.” Amazingly, they did. It took five days using oxen to move the church to the .9-acre triangle of donated land at Ohayo Mountain’s base. The congregants then built a community hall (damaged and rebuilt after a 1935 fire) to include a kitchen, community meeting space, and Sunday school annex. Over time, the local Methodist community, spread over three campuses, wanted to consolidate and expand. The Glenford property’s limitations became apparent. That’s when the Hurliman-Pipman family stepped in.

In the spring of 2008 they set up camp on the land and began remodeling. “Our priority was ecological,” Pipman says. “We weren’t concerned with aesthetics and we didn’t really have a plan.” First, they made the former community hall their living quarters with a kitchen from Green Demolitions, a nonprofit that recycles luxury kitchens and bathrooms. The honey-colored solid wood countertops, ornate cabinetry, and shelves laden with canned veggies are reminiscent of the late 19th century. Four-paned windows and wood doors, bought secondhand from the Door Jamb in Shokan, complete the vintage look. A large, modern industrial stove is where Pipman, now a case worker for Hudson Valley Adoption Services, began her home-based business Much Mor Bread. 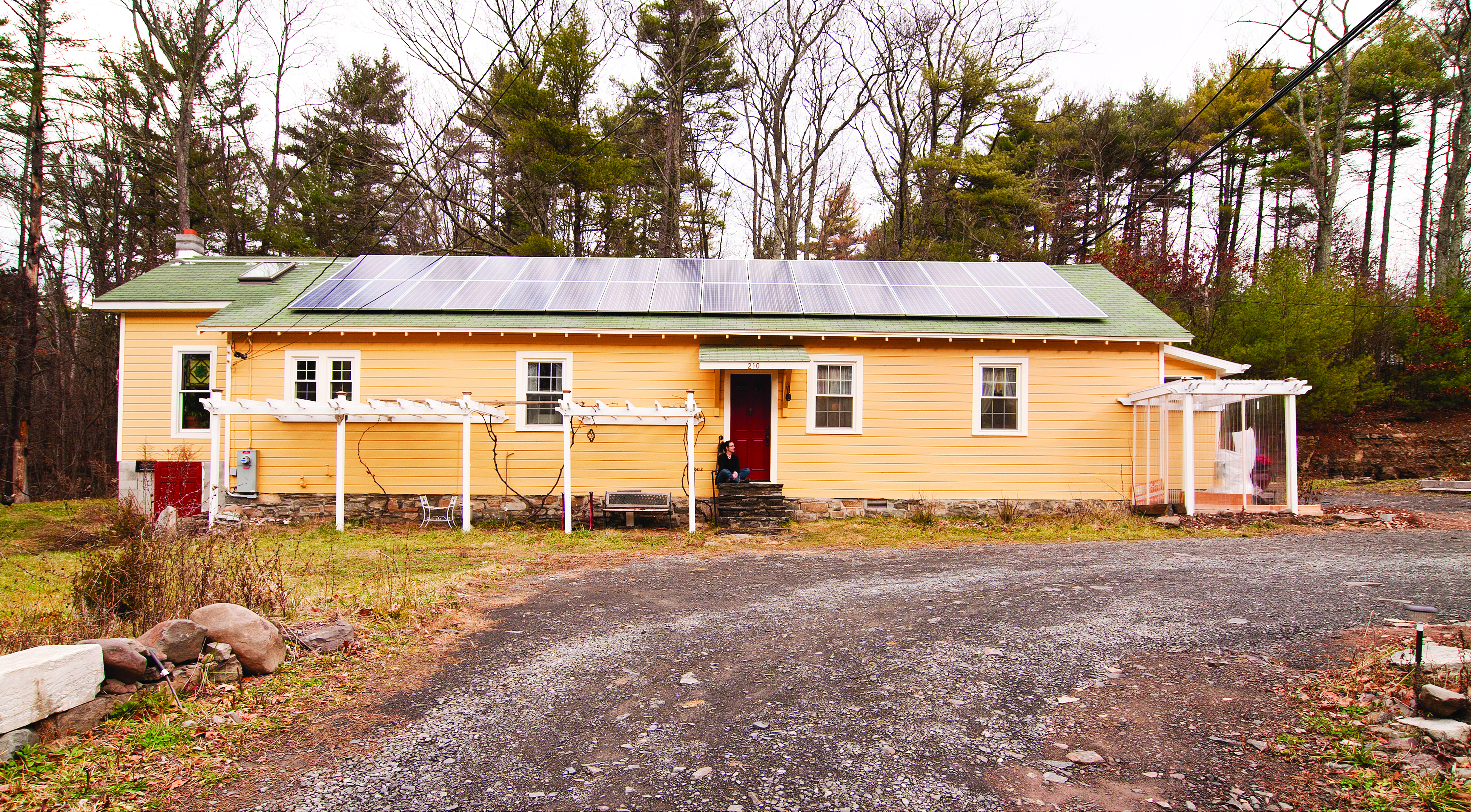 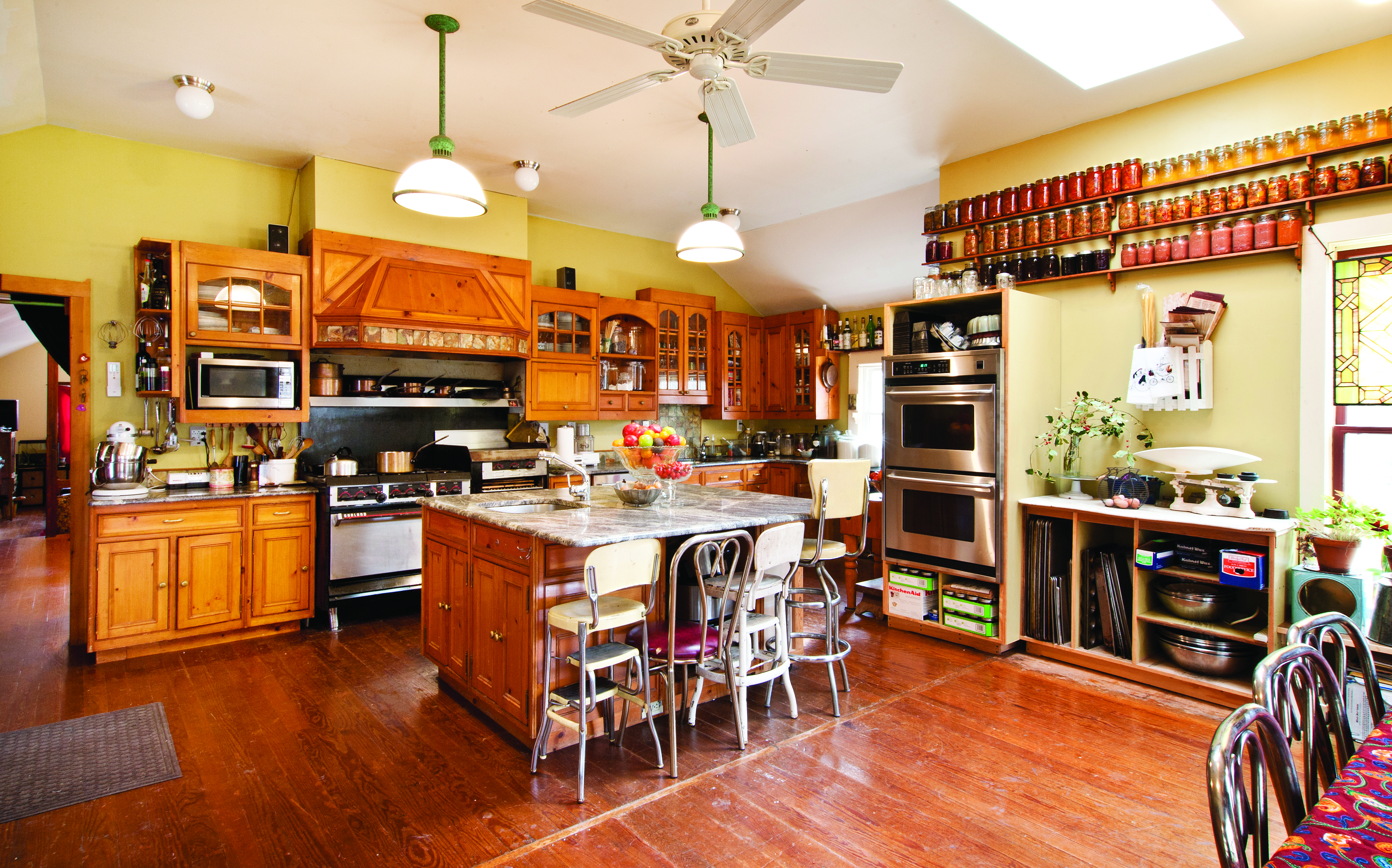 The hall’s drop-ceiling tiles, once removed, revealed an arched two-story ceiling, and new, higher windows infused the new family room with light. The former stage was transformed into an office and laundry room. Now, along the high walls, stained-glass art by Pipman’s sister and windows recycled from her parent’s house alternate with bookshelves; an oversize National Geographic world map hangs on the back wall, and a baby grand piano sits in the corner. The white-tiled bathroom includes an antique sink, clawfoot tub, and bidet, all salvaged from Zaborski’s architectural salvage in Kingston. The Sunday school annex was divided into two bedrooms and more office space, and a mudroom and deck were added. Pipman calls it her “loft in the sticks.”

Today, solar panels supply most of the complex’s energy and charge the family’s plug-in hybrid car. Hurlimann has built a large garden over the former church parking lot and planted blueberry and raspberry bushes, grapes, and a fig tree, along with lots of vegetables. A recently built pond will eventually provide fish. A recycled stone walkway leads through newly planted fruit trees to the original church.

Although modernized, the former church sanctuary remains true to the original 19th-century design. Low ceilings were removed, exposing the original beams and bell tower, and solar tubes provide natural light. Insulation was added to the walls but the original dark wood carved paneling was refurbished or painstakingly replaced, and Pipman added antique chandeliers and a small centerpiece to the alter. Stained-glass windows, remnants of the building’s rich history, bathe the square chapel in blue and green light. Pipman’s small art studio sits above like a choir loft and the space regularly hosts public events—everything from book signings to art installations and musical performances. 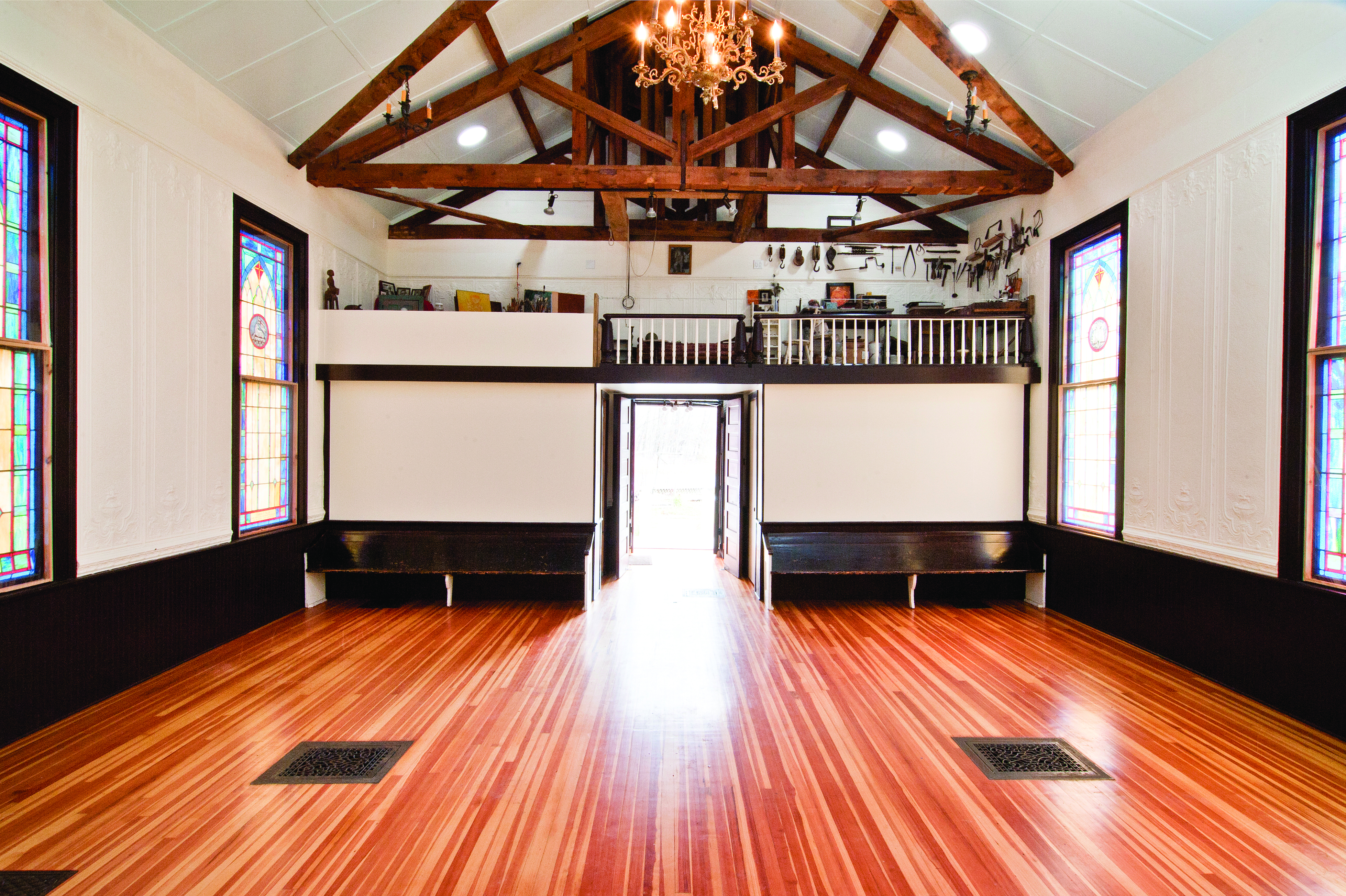 On the last Friday of every month, the Old Glenford church hosts an intimate house concert. Music Night showcases an eclectic variety of acts, and has become the go-to listening room for local musicians introducing new material and anyone else who wants an affordable, high-quality night out. Performers at previous music nights include Deni Bonet, The Trapps, the Duke McVinnie Band, Lara Hope and the Ark-Tones, Robert Burke Warren, and Marc Black.

It was conceived by Pipman and local singer Carmen Senski as a benefit for the Hudson Valley Sudbury School—a community Pipman discovered serendipitously. Back in Manhattan, she had volunteered with the original Brooklyn Free School and was intrigued by the alternative-education movement. She knew she wanted to take a similar approach with her own children’s education. “I knew there was a little school up here, but I couldn’t remember the name,” she says. When she found it, only three miles from her house, she knew it was kismet. Her sons both attend the school today.